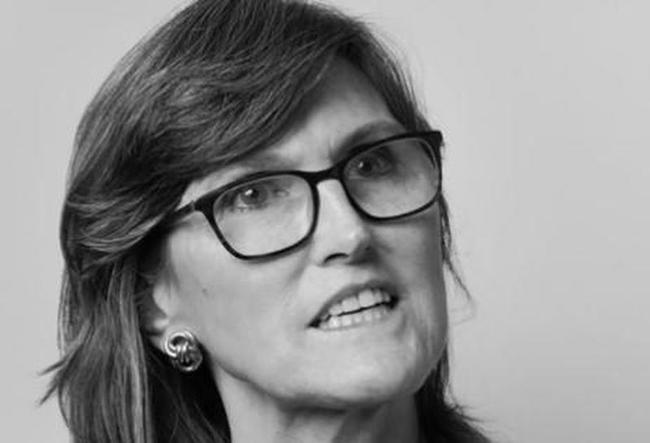 
No sooner did we just write about ARK Invest’s Cathie Wood involuntarily losing majority control of her own firm than it has been revealed that her firm – known for its massively outsized investments in Tesla (and numerous other tech companies that are vastly overpriced and incapable of generating consistent cash) has now surpassed JP Morgan “for the largest actively managed exchange-traded fund.”

According to Bloomberg, the ARK Innovation ETF (ARKK) saw a record inflow of $275 million on Thursday that helped boost it to just under $16 billion in total assets. This surpasses the $15.2 billion JPMorgan Ultra-Short Income ETF (JPST).

The firm is just one of the financial assets that the everyday working-man doesn’t even know exists, yet was the major beneficiary of a “rising tide” created by the Fed injecting trillions of dollars of liquidity (colloquially known as QE Infinity) that caused a massive boom in tech stocks off their lows in March.

The ARKK ETF, which has a insane strategic 10% weighting in Tesla, is up 150% year-to-date. Tesla is up 650% this year, totally not as a result of Softbank and Goldman Sachs options buying schemes and definitely as a result of their super-duper financials, we’re sure.

This outperformance comes from the same visionary who, back in November, was delivered notice from Resolute Management Investors that they would be taking control of her firm due to an option in a deal Wood had negotiated back in 2016.

The question for ARK is how long can it defy gravity AND history, which is littered with supernovas like $ARKK a la The CMG Focus Fund, which shot up 900%, got $8b aum, only to drop 50% in ’08, now only $300m (despite bounce back & lifetime perf > SPX). Once bitten twice shy.. pic.twitter.com/7z1SsM5A4K

The power shift, which Pensions & Investments notes isn’t especially amicable, came due to a 2016 agreement between Resolute and ARK, where RIM acquired a minority stake in the investment manager – with a call option “to purchase a controlling voting and equity interest in (ARK) that is exercisable in 2021.”

While the financial terms of the deal had not been made available, ARK’s founder, CEO and CIO, Wood, who currently owns 50% to 75% of the firm, didn’t seem happy with RIM’s decision.

Wood said in a statement: “On behalf of the employee-owners of ARK, we are disappointed that Resolute Investment Managers and its private equity owner, Kelso & Co., have chosen to issue this unwelcome notice that they intend to seize control of our business.”

“As reported by Morningstar, ARK has delivered top one-percentile returns for multiple products over one-, three- and five-year periods. Thanks to our research and investing success, paired with our innovative digital marketing strategies, ARK now ranks among the largest ETF issuers in the U.S.,” Wood continued.

She concluded: “The remarkable success of our team is rooted firmly in a culture of transparency, collaboration, and employee ownership. We do not believe that equity ownership by a party tangential to our business is in the best interest of ARK’s stakeholders.”

As we said last month: “Regardless, the deal may actually be a blessing in disguise for Wood, who is likely going to receive a large payday and gets a chance to potentially exit on top – with the added bonus of a scapegoat to blame any future implosion by the firm on.”

And hey, we were going to congratulate Cathie on passing J.P. Morgan, but we guess what we meant to say was, “Congratulations, Resolute Investment Managers!”