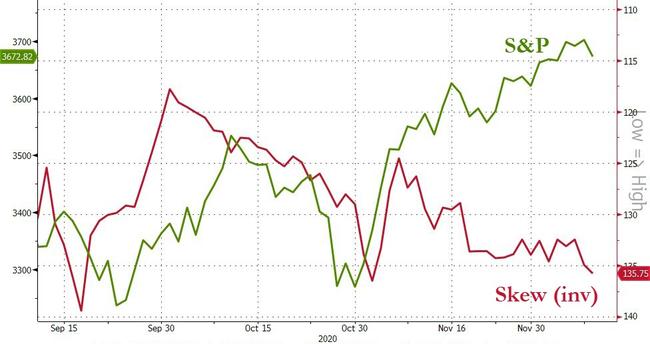 
There are three main dynamics in the markets currently as we head into year-end (and more imminently, next week’s quad witch):

Nomura’s Charlie McElligott outlines all three below before suggesting a “muddle through” solution to asset allocation amid this chaos.

Market Technicals are “getting a bit weird” warns McElligott:

VVIX / tails got a bit crazy and seemingly “overreacting” relative to the sub-1% move in Eq Index, which likely captures two dynamics: Dealers being unable to be short vol in any meaningful size into year-end, complicated further by continued weakening liquidity into the year-end—which is of course a function of the first “risk management” point for both sell- and buy- side

SPX and QQQ 1m vols moved higher on the selloff and term structures flattened in recent reversal of trend for all, while again, “tails” went notably “bid” with VVIX +15 at one points, YIKES

But, the bulls are in charge for now on flow- and narrative-driven themes:

…it is clear there that the majority of investors remains in thematic rebalancing “chase” mode, as Cyclical Value- / Leverage- / economic “Renormalization”- plays all keep working from the double-whammy of “vaccine reflation + lame-duck stimulus” feel-good narratives (plus a mathematically certain “base-effect” to come in 2021 year-over-year inflation data prints after the pandemic shock is within sample)—over the past few days, we have continued to see ongoing bullish expressions to play for a short-dated pro-cyclical “risk-on” trades (some outright wing-y) in key “reflation” thematic areas:

The other trade to note, and on account of my recent point regarding what looks to be the market’s underpricing the risk of dual Democrat “Blue Wave” shockers in the GA Senate Run-offs, is to own that Jan 8 weekly straddle, which has traded from ~2.7% implied move down to ~2.0%ish now, and seems too cheap relative to the potential for market thematic calamity under the hood within Equities (more “Momentum Shock” potential on Value / Growth “rotation”) but also too with the Rates and Inflation complex risks (deep OTM Payers, anyone?)

With polling still holding a Dem tilt – yet market still generally assuming GOP wins and maintenance of status quo “DC gridlock” (thus the recent “everything rally”) – a double Democratic Win in GA would completely reopen markets to unprecedented government deficit spending largesse and super-stimulus ($4T-esque) – which in conjunction risks lighting the sleeping macro giant of decade-long “INFLATION SKEPTICISM” on fire; Yet too, when considering these policies would then be paired with across-the-boards tax hikes and re-regulation of industry, we see heightened odds of STAGFLATION-looking trade thematic

However, pullback risks remain, warns the Nomura strategist, due to some unruly “tail-y” throw-overs into said January Georgia run-off surprise potential, and most are tied to “sentiment” and “positioning” -overshoots:

So, having taken all that in – bullish investors (on flow- and narrative-driven risk-on catalysts), bearish investors (fearing extreme sentiment and positioning overshoots) both facing low (and falling) liquidity and increasing costs of hedging – Nomura’s McElligott thinks a realistic way to play for next year is frankly a “muddle-through barbell” which tilts towards economic renormalization, but also hedges you with duration-sensitivity on account of clunky and laboring recovery with periods of disappointing data taking advantage of the narrative crowding into the expected “reflation regime change” which will mean that the Fed stays “heavy handed” with QE / monetary policy.