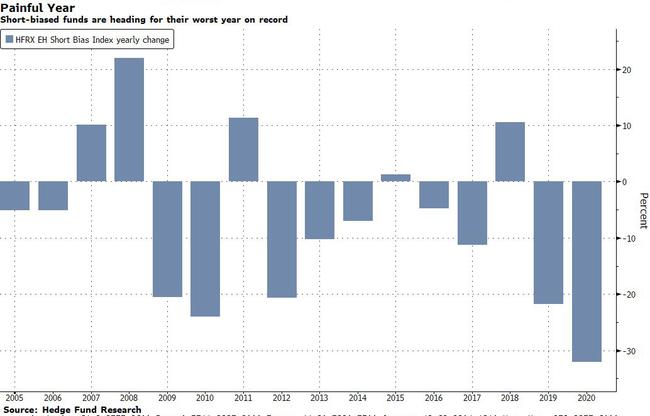 Short sellers won some high-profile victories this year with the collapse of payments firm Wirecard AG and hospital operator NMC Health Plc. But barring exceptions, 2020 is shaping up to be the worst year on record for some investors seeking to profit from share price declines.

A monthly index of short-selling hedge funds is down 32% this year through October, according to data provider Hedge Fund Research. The performance is unlikely to have improved in November, given that European stocks posted their biggest-ever gain last month while the S&P 500 Index set a record.

The short funds index had its biggest ever monthly gain in March, when global markets plunged because of the coronavirus pandemic, according to HFR’s data going back to 2005. Still, returns were quickly wiped out when stock prices came surging back. Regulators in some countries banned short sales, governments stepped in with economic rescue packages and central banks flooded the markets with liquidity. The equity rally accelerated last month after drugmakers reported success in developing vaccines.

“The money flows into the market means fundamental shorts have been very challenging,” said Mark Hiley, founding partner of The Analyst Research LLP, which produces both long and short investment recommendations and has published notes on companies including Wirecard. “Despite the big selloff in March it was almost impossible to reposition and then in November the market took everyone by surprise despite the vaccine being expected at some point.”

It’s been particularly difficult for those who were bearish on Tesla Inc., a favorite of individual investors. The stock, the subject of a years-long battle between skeptics and believers in Chief Executive Officer Elon Musk’s vision, has soared almost 700% in 2020. The car company’s market value is approaching $620 billion, and it will crown the year by joining the S&P 500 on Dec. 21.

“It’s been painful, clearly,” veteran short seller Jim Chanos, who has been betting against Tesla for five years, said in a Bloomberg “Front Row” interview. Shorts borrow shares and sell them, hoping to buy them back at a lower price to return to the lender, pocketing the difference.

The biggest short bet in the biotech sector, U.S. vaccine developer Moderna, also punished bears. The shares are up more than 700% in 2020, with the company on the verge of winning regulatory approval for an inoculation against the novel coronavirus. Investors have pared back their short positions in the U.K.’s Ocado Group as demand for online grocery shopping has surged. In the U.S., personal styling company Stitch Fix Inc. has benefited from retail stores closing. The stock jumped 39% on Tuesday after the company reported better-than-expected quarterly results.

Still, November was brutal for short trading, with a strong rally in stocks that were previously at the bottom of the pile for the year, while erstwhile winners either “treaded water” or went down slightly, according to Barry Norris, who runs Argonaut Capital Partners LLP. The firm’s Absolute Return Fund, which goes both long and short, has returned 15% this year, though has declined 12% in the past month, according to data compiled by Bloomberg.

Some short sellers are hoping 2021 will be better, with Norris predicting the current market exuberance likely fading early in the new year. “A lot of these companies that have rallied a long way and in many cases have regained all their Covid losses are still in quite a big hole with pretty limited growth prospects, loads of cash burn, and not much scope for certainly to exceed investors’ expectations,” Norris said. “While in general this quarter will have been pretty difficult for all short sellers, I can see some great opportunities ahead in individual stocks.”