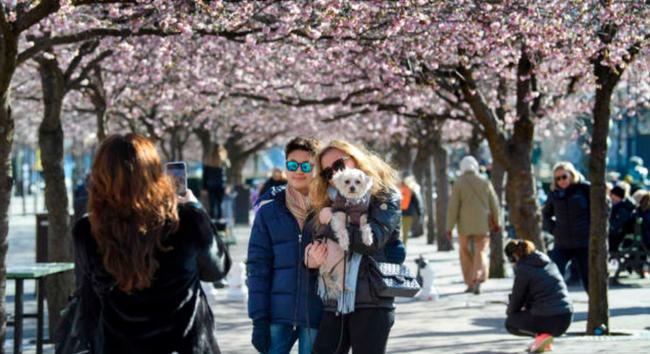 
Jubilant journalists from London, to New York, to Brussels and seemingly everywhere in between were almost jubilant a little over a month ago when headlines pronounced that even Sweden, the lone European holdouts who kept schools open and the economy running as normal for the bulk of the pandemic, would impose some mandatory restrictions as cases, hospitalizations and deaths were once again on the rise.

Sweden’s approach came with a cost, of course: For months, it had one of the higher death tolls in Europe (though still not the highest – that title belongs to the UK). And some have questioned whether Sweden’s laissez faire approach, engineered by chief virologist Anders Tegnell,  might have been misguided – even though data show most Swedes voluntarily obeyed all the social distancing and mask related ‘recommendations.”

As the outbreak has started to slow in all but the most badly hit parts of Europe – despite the advent of the cold winter months, which purportedly should help accelerate the spread of the virus, as a collection of studies cited by WSJ seem to suggest – Sweden is on the cusp of passing its first legally binding laws requiring Swedes to submit to mandatory social dostancing rules and the wearing of masks

To be sure, this bill (which hasn’t yet been passed into law) isn’t the only thing Sweden’s government has done to combat the spread: The government famously barred the sales of alcohol after 2200, a measure that has been embraced by a handful of jurisdictions around the globe.

The bill, which would allow the minority coalition to cut shops’ opening hours and limit footfall, is due to take effect in March if it makes it through the consultation process, Minister of Health and Social Affairs Lena Hallengren said on Wednesday. She stressed that the government would only shutter businesses as a last resort, if parliament agrees. “We are not rid of the pandemic, even if the vaccines obviously brighten the prospects,” Hallengren said. “We see a need to have regulation in place during next year.” Sweden has so far avoided a full lockdown and relied mostly on voluntary measures to fight the pandemic. That’s in part because the government lacked the legal framework to do more. A temporary law that made it possible to close down businesses expired on June 30, without ever being enforced. But after a sharp increase in coronavirus cases and deaths, Sweden’s government is stepping up its fight against the pandemic. That includes capping the number of people permitted to gather in public at eight, as well as a ban on alcohol sales after 10 p.m.

Still, not unlike Japan, Sweden has few legal tools to enforce limits on stores, gyms or the use of public transport. The new law, if passed, would stop short of regulating functions at private homes.

Sweden’s 7-day average for new cases is currently back at its pandemic peak:

But officials stressed that a full-on lockdown remains virtually impossible in Sweden: “We have made severe restrictions to people’s way of life, but it’s not possible to close down entirely…However, we need to be able to take more exact measures that also impact places that are not covered by current legislation.”