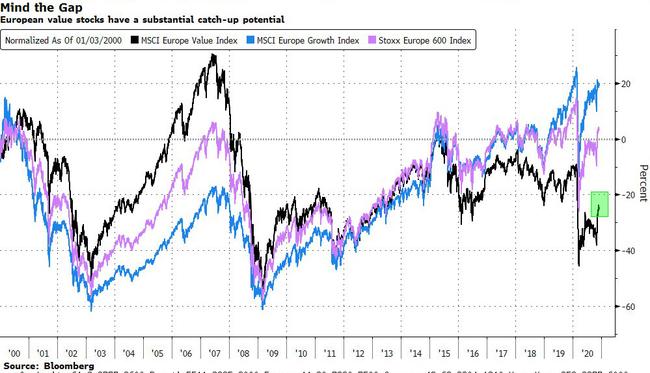 With the pandemic-induced recession slowly receding, value stocks in Europe are finally outperforming growth peers, and an increasing number of fund managers say that, after plenty of false starts, this time the rotation may only be in its early days.

The region’s heavier weighing in value stocks has been a drag for the past 10 years, causing the continent’s markets to lag behind the U.S. But a shift began in late October, and picked up pace in November with the looming availability of Covid-19 vaccines that promise something resembling normal life in 2021.

“Value has led the market’s recovery coming out of every one of the last 14 global recessions,” said Ian Butler, a portfolio manager at J.P. Morgan Asset Management. Butlers explains Value’s underperformance in recent years by the lack of economic and earnings growth, but as the economies reopen and the outlook improves, investors should turn to valuation as an “alpha signal” once more, he said, adding that value bounced back “with a vengeance” after previous drawdowns of a similar magnitude setting “a strong historical precedent.”

After underperforming for much of 2020, the MSCI Europe Value Index is up 23% since Oct. 29, while its growth counterpart is up only 8.4%. Should that persist, it would argue for investors pouring more money into Europe, where the weighting of value stocks is heavier than into other markets. Over the past 20 years, the outperformance of value often coincided with the outperformance of Europe. “Europe is a value market while the U.S. is a growth market, simply speaking,” said Amundi head of equities Kasper Elmgreen. “A scenario where value does well relative to growth benefits Europe in my view.”

A synchronized economic recovery will make growth stocks less appealing, said Luca Paolini, chief strategist at Pictet Asset Management. As a result the firm is “slowly adding a little bit of value” to its asset allocation, he said. But every single attempt at a value comeback has been short lived, and this one will falter too unless rates head back up, said Pictet’s Paolini. “The precondition for a solid and sustainable (value) rally is not only synchronized growth but also a sustained increase in bond yields, because without that we will still be kind of thinking, is it for real or is it not,” he said.

To find the last long period of value outperformance, investors have to go back to the beginning of the century, after the internet bubble burst. More recently, the last episode was in the aftermath of the global financial crisis, when value outperformed growth for about six months, led by a rebound in bank shares.

The stars are aligned this time for a possible multiyear outperformance by value, according to Amundi’s Elmgreen. Value stocks are at “an attractive starting point” in valuation, both in absolute terms and compared to growth, at a time when the economic rebound “will be very meaningful,” he said.

till, there are several headwinds ahead, according to Kevin Thozet, member of the investment committee at Carmignac Gestion, such as the dependence on government actions and poor earnings visibility until the vaccine is widely available, while tailwinds like financial conditions and bullish sentiment are likely to fade. “Both aspects are casting doubt over the sustainability of value stocks’ recent streak,” Thozet said.

In the short term, Citigroup Inc. strategists recommend value because financial markets should price in higher inflation expectations. After that, though, there are structural headwinds for reflation that don’t bode well for inexpensive stocks over the longer term, they wrote in a report last week, citing risks such as potential collapses in house prices, financial assets or the oil price.

In the short term, Citigroup Inc. strategists recommend value because financial markets should price in higher inflation expectations. After that, though, there are structural headwinds for reflation that don’t bode well for inexpensive stocks over the longer term, they wrote in a report last week, citing risks such as potential collapses in house prices, financial assets or the oil price.

For now, though, the value trade has momentum behind it in part because of fund managers’ fear of missing out. November was the best month in 45 years for European equities, with one of the biggest value outperformances on record, said Barclays Plc strategist Emmanuel Cau. “Yet most investors appear to have missed out on the value bounce, with a large majority of funds trailing their benchmark in November,” he said. “FOMO might prompt them to chase the rally despite short-term risks.”