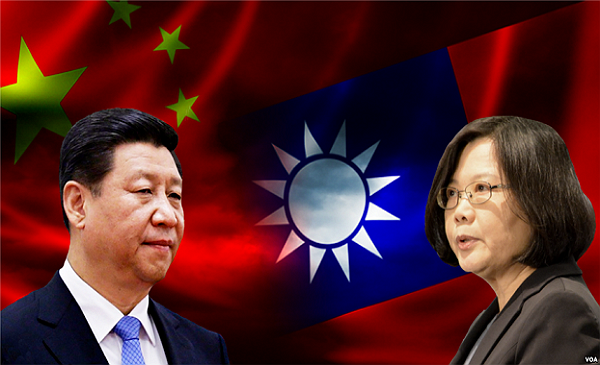 
Taiwan says it’s coming under increasingly direct threats from the mainland amid pending US weapons sales to the breakaway republic.

President Tsai Ing-wen warned in urgent statements made Tuesday that Taiwan now faces military threats on a “daily basis” from “authoritarian forces” – a clear reference to China as it presses its claims over the island.

She said to a security forum in Taipei that there are huge threats especially in the “increasingly militarized South China Sea” – an area which has seen soaring tensions based on US patrols flying near Chinese-claimed artificial islands.

“Authoritarian forces consistently attempt to violate the existing norms-based order,” Tsai said. “Taiwan has been at the receiving end of such military threats on a daily basis.”

Beijing has repeatedly a series of US arms sales transfers since the summer, with the latest being a newly announced $280 million arms sale package, which is the sixth this year.

Sales have included drones, anti-air defense systems, radar equipment, and a coastal invasion early warning system and missiles. China has said it will retaliate, but has never been specific in its threats, but in the last months has clearly ramped up PLA military exercises across from and near the island.

It’s connected with Trump’s pressure campaign on China which the administration has vowed to ramp up right till Biden’s inauguration on Jan.20. Reuters summarizes the arms sales as follows:

The outgoing Trump administration has ramped up support for the island democracy, with 11 arms sale packages in total, and on Monday the U.S. government notified Congress of the sale of a new Field Information Communications System.

Such sales – $5 billion worth this year – have riled China, adding to existing tension between Beijing and Washington, with China placing sanctions on U.S. companies involved and stepping up its military activities near Taiwan, including regular air force missions.

2020 is a record year for US arms sales to Taiwan. Previous high was $7.1 billion according to DSCA. Would be interesting to map these sales figures against the state of relations between the US and China. @securitysplat pic.twitter.com/b0x9p2g2h8

The question remains the degree China is willing to hit back at Washington sanctions and ‘illicit’ arms sales, which Beijing officials have long condemned as violating the ‘One China’ status quo, while Trump remains in office.

Waiting out the clock will be made difficult given there’s near daily escalation out of Washington, whether it be the latest sanctions on Chinese officials related to Hong Kong, or the recent ban on select Chinese cotton imports, as well as severe visa restrictions on Communist Party members and their families.