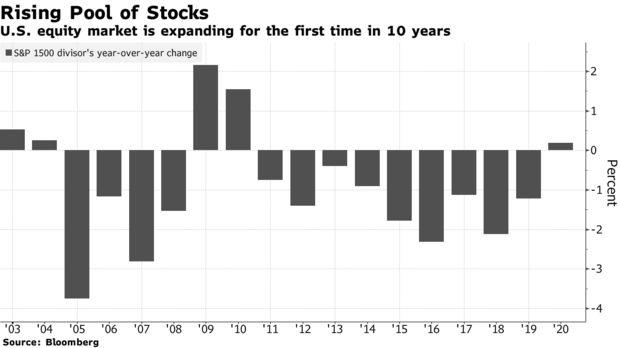 
For US corporations, the “teens” decade – the years from 2010 to 2019 – was a historic “get rich quick” boom for management when buybacks emerged as the most powerful force levitating stocks (and equity-linked compensation) as companies collectively issued trillions in debt and used the proceeds to repurchase over $10 trillion worth of their own shares, in the process dramatically lifting the stock market and reducing the number of outstanding shares (we called it a slow-motion MBO) and pushing the S&P’s earnings per share ever higher even when there was no actual earnings growth simply because the number of shares declined year after year.

All of that changed in 2020 when thanks to covid, central banks made a triumphal return to their core competency of propping up stocks at all costs (just moments ago we reported that the BOJ is now the single-biggest owner of Japanese stocks) and by injecting over $20 trillion in liquidity in 2020, a rate of over $1.2 billion every hour, buybacks were no longer required to push markets higher and preserve the biggest asset bubble ever created. What also changed is that since buybacks were no longer needed, with the Fed and its central bank peers backstopping all risk assets, buybacks reversed and for the first time since 2010, in 2020 companies will sell more stock than they buy back.

As Bloomberg reports, “while American firms normally repurchase way more stock than they sell, this year has been different, as offerings by everyone from Snowflake Inc. to Warner Music Group Corp. flooded the market with shares.” It’s not just growth stocks that are rushing to capitalize from the market’s peak euphoria phase, which according to Goldman has seen positioning so “extremely stretched” it is currently in the 98th percentile in history:

As Bloomberg notes, companies that were hurt most during the pandemic, from airlines to cruise lines, are also rushing to raise cash and shore up balance sheets. And they are finding plenty of willing buyers.

The result is that amid the flood of equity offerings, both initial and secondary, companies have announced plans to raise about $510 billion via share offerings in 2020, up 50% from last year, according to data compiled by EPFR. This means that for the first time since the 2009 crisis, that amount of stock sales matches the amount that companies announced they’d remove via buybacks and takeovers. For context, over the past decade an average of $3 was bought back (thanks to ultra cheap debt) for every $1 raised.

Normally, the reduction in buybacks would be a flashing red alert as the largest source of stock demand was no longer there. However, this is anything but “normal times”, as central banks are now injecting such an unprecedented firehose of liquidity into  markets – not the economy – even the BIS is shocked.

It’s also the case that normally, such a flood of selling would hit stocks simply due to excess supply. But, yet again, in this bizarro centrally-planned freakshow of a “market” nobody has any idea what will happen as Randy Frederick, VP of trading and derivatives for the Schwab Center for Financial Research, freely admits: “corporate demand is one component that drives the market higher that is no longer relevant in this risk-on atmosphere. On its own, I would not say it makes the market go down, but it might cause the market to flatten out and not go much higher.” Or it could just send stocks soaring even more; the reality is that we now live in a centrally-planned world where corporate actions no longer impact prices – those are only influenced by fund flows – and as such the surge in stock offerings could merely accelerate the melt up. Ultimately, it’s all what central banks decide.

One thing we do know is that the explosion in offerings is finally increasing the total pool of stocks (another trend that normally pressures stock prices at market tops in the past, but again, this is anything but normal). The S&P 1500 Index divisor, a proxy for outstanding shares, has risen 0.2% this year, its first increase in 10 years according to Bloomberg data.

Yet another warning sign: while the boom in IPOs underscores “a robust market” according to Bloomberg, the increase in share counts could also be viewed as an indication companies are “selling high,” with valuations too attractive to resist – while being too rich to justify buybacks (or simply refusing to take a gamble to issue debt and repurchase stock at a time when the airline industry can’t get a bailout due to its chronic stock repurchases in the past decade). To be sure, at 22 times earnings, the S&P 500 trades near the highest multiple since the dot-com era.

“Obviously when the market is at an all-time high, you want to issue shares now, because the shares are worth a lot more than they would be if the market was tanking,” EPFR analyst Winston Chua told Bloomberg. “Looking at the market broadly, companies are not being supportive of share prices.“

Luckily, markets no longer exist as they have been completely replaces as policy tools for activist central planners armed with money printers. It’s also why skeptics who rely on logic and fundmentals are proven wrong again and again: “There’s a lack of an incremental buyer out there, so that’s a negative, and it still signals some caution as companies let the cash accumulate,” said Mike Bailey, director of research at FBB Capital Partners. Which is true, but one just has to spin the data ever so slightly to represent it in a bullish light, as Bailey does next: “The flip side is, you are building more pressure for companies to really drop the hammer and start to buy back stock next year and into 2022.”

That’s the scenario envisioned by Goldman chied strategist David Kostin: In 2021, he expects net share repurchases will double to $300 billion and equity issuance will fall from this year’s record high, his team forecast. After all, he has to use fundamentals to justify his 4,300 price target – saying “buy because central banks got your back” would be frowned upon.

Of course, for the skeptics out there who are screaming this is idiocy pure and simple, you are right… at least based on empirical data. As Bloomberg notes, Corporate actions on equities showed a close inverse relationship with the market’s performance. During the two decades through 2015, companies boosted net equity demand in 15 different years, 12 of which saw the S&P 500 gain, a study by EPFR showed. In the five years when corporate supply increased, the equity benchmark fell 60% of the time.

But – once again – this is anything but normal times: we now live in a world where central banks have just one purpose: to keep stocks rising even higher because the moment the game of musical chairs stops, it’s all over.

That said, there is a silver lining: companies are once again very cash rich. The new listings on U.S. exchanges have raised more than $150 billion this year. Even firms recently left for dead such as Airbnb – it rents out apartments during the worst pandemic the world has seen in a century – just filed to sell as much as $2.6 billion to cap one of the busiest years ever. Other companies planning listings include food delivery service DoorDash and video-game company Roblox.

“In every cycle, when we say, ‘OK, that was the deal the market rolled over on,’ and all of a sudden everyone’s pulled in their horns,” said Arthur Hogan, chief market strategist at National Securities Corp. “I don’t think we’re there yet, but certainly the number of deals has been pretty historic,” he added. “Companies that shouldn’t be coming out come out and there’s always a tipping point.”

Yes Art, but thanks to Jerome Powell and his central-planning friends, “this time continues to be different.”