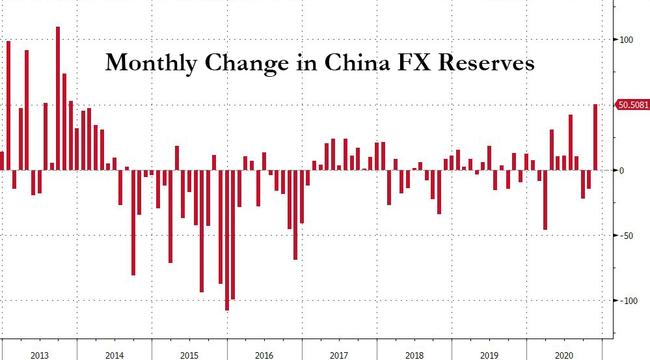 
A little over five years since China’s 2015 devaluation, which sparked an avalanche of FX reserve liquidation as Beijing scrambled to halt a tsunami of capital outflows which at one point culminated in a furious wave of bitcoin buying by Chinese residents, China is once again adding FX reserves at a blistering pace.

Around the same time that the Chinese National Bureau of Statistics overnight reported a surge in exports and a record trade surplus, the PBOC also reported that at the end of November, China’s Forex reserves jumped to $3.178 trillion, beating estimates of $3.15 trillion, and the highest number since August 2016.

And, at $50.5BN, this was also the biggest monthly increase in FX reserves since November 2013.

And just like the rapid collapse in yuan reserves in the 2015-2017 period was a result of Beijing’s scramble to sell dollar assets and halt the plunge in the yuan and stem the tidal wave of capital outflows, with the recent surge in FX reserves, it appears that China’s authorities are finally pushing back on yuan appreciation which has reached a level where concerns about imported deflation are starting to emerge. Furthermore, while a chunk of the jump in reserves was likely based on valuation adjustments and FX rate changes as a SAFE spokeswoman said, it is likely that the bulk was the result of USD-buying intervention.

That said, there is always a caveat when dealing with Chinese reserve data: as Flint cautions, these estimates are based on valuation-adjustments can be flawed as we don’t know the exact composition of China’s reserves. Nor is it clear whether China revalues securities within its portfolio on a monthly basis. To get the cleanest picture of Chinese capital flows, it’s best to wait for the SAFE dataset on “cross-border RMB flows” which is Goldman’s preferred FX flow measure and which gives a far more definitive picture of what’s really happening behind China’s opaque capital firewall.

Still, with the Chinese yuan soaring in the past 6 months as the dollar has plunged, and fast approaching where it was around the time of the August 2015 devaluation…

… it is only a matter of time before Beijing will have no choice but to aggressively intervene in the currency market, sending the dollar blasting off in the opposite direction.