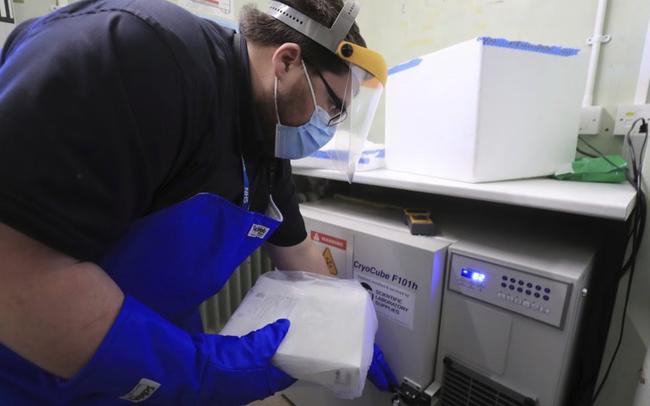 Britain’s big day is almost here. After the first shipments of the Pfizer COVID-19 vaccine doses arrived in the UK on Sunday (stored in their specialty temperature-sealed containers, of course), the country’s health-care system is preparing to start doling out the first jabs on Tuesday.

In an attempt to underscore the importance of this day, Health Secretary Matt Hancock has branded it “V-Day,” a reference to Britain’s triumph in WWII. An NHS pharmacist who was among the first to receive supplies of the vaccine told the AP that the situation was “just amazing”.

“To know that they are here, and we are amongst the first in the country to actually receive the vaccine and therefore the first in the world, is just amazing,” said Louise Coughlan, joint chief pharmacist at Croydon Health Services NHS Trust, just south of London. “I’m so proud,” she added. Vaccinations will be administered starting Tuesday at around 50 hospital hubs in England. Scotland, Wales and Northern Ireland will also begin their vaccination rollouts the same day.

According to the AP, health agencies and governments around the world will be closely monitoring the British vaccination programs, which will take months to finish. They will be closely noting any successes or failures, as the British people essentially become a type of guinea pig for new mRNA vaccines.

Britain is planning to continue researching the efficacy of several alternative COVID vaccines as the WHO on Monday weighs the ethics of proposed “human challenge” trials that involve  deliberately infecting young health patients with the virus to directly test the efficacy of various products, and compare them to one another.

Russia on Saturday began vaccinating thousands of doctors, teachers and others at dozens of centers in Moscow with its Russian-made Sputnik V vaccine, which was approved over the summer after being tested in only a few dozen people.

The excitement in Britain, which has Europe’s highest virus-related death toll at more than 61,000, was palpable.

“Despite the huge complexities, hospitals will kickstart the first phase of the largest scale vaccination campaign in our country’s history from Tuesday,” said Professor Stephen Powis, the national medical director of NHS England.

Meanwhile, in the US, DHHS head Alex Azar said Sunday that the FDA could grant its emergency approval to the Pfizer vaccine as soon as Thursday, allowing the first vaccinations to begin in a matter of hours. Azar added that he believes any American who wants a vaccine should have access to one by the end of Q1. In Germany, which has been slightly more cautious with its approvals, said Monday that it aims to vaccinate 10 million people by the end of the first quarter.

Global confirmed COVID cases topped 67MM on Monday, driven by more record numbers out of the US. In the US, confirmed cases surpassed 14.5MM late Sunday, while confirmed COVID deaths near the 275K mark. The 7-day average for new cases in the US climbed to a new record Sunday as the US reported another 176.8K new cases, breaking below 200K for the first time in five days. Still, the 7-day average climbed to 191K.

Daily deaths topped 2K once again, while hospitalizations hit 101.5K, yet another record.

As temperatures drop in the northeast and frigid midwest and plain states, hospitalizations per capita in the Northeast have outpaced the peak from the worst of the Sun Belt’s outbreak over the summer.

Here’s some more COVID-19 news from overnight and Monday morning:

US President-elect Biden is expected to nominate Massachusetts General Hospital Chief of Infectious Diseases Rochelle Walensky to run the CDC, while he is also to nominate California Attorney General Becerra as HHS Secretary (Source: Newswires).

China’s Sinovac said it secured approximately USD 500mln in funding for COVID-19 vaccine development and expects to be able to manufacture 300mln COVID-19 vaccine doses annually, while it seeks to complete the construction of a 2nd facility by year-end which its targets to double its capacity (Source: Newswires).

Two leading coronavirus vaccine developers – Pfizer Inc. and AstraZeneca Plc – have applied for emergency use authorization in India, according to the Press Trust of India (Source: Bloomberg).

South Korea confirms 615 cases, down from 631 a day ago, bringing the country’s total to 38,161 with 549 deaths. The government will tighten social distancing rules in greater Seoul from Tuesday, closing karaoke bars, gyms and indoor sports centers (Source: Nikkei).

Nike is Launching and Essentially Rebranding its NFT Marketplace