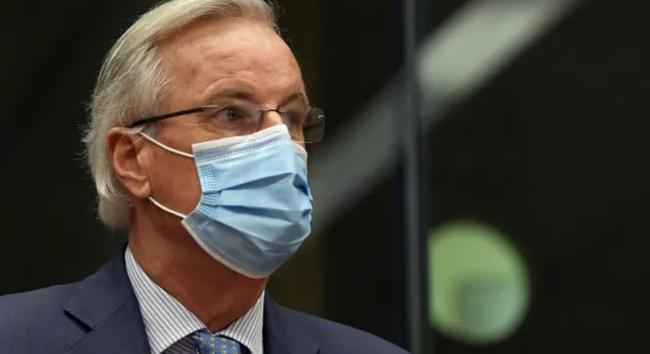 
Despite this weekend’s political intervention, which saw Boris Johnson hop on the horn with EU Commission bureaucrat-in-chief Ursula von der Leyen to try and soften the two sides’ ‘red lines’, EU chief negotiator Michel Barnier told a group of leading EU27 bureaucrats Monday morning that no progress had been made on Sunday, sending cable tumbling even lower.

Meanwhile, a spokesman for PM Boris Johnson promised the UK won’t continue EU trade talks next year if the two sides fail to secure a deal, while insisting that the Brexit transition period would not be extended beyond Dec. 31, after ‘Brexit Party’ leader Nigel Farage raised questions about the possibility of another extension.

The situation wasn’t helped by reports in British tabloids like the Sun which claimed Johnson and his government were preparing to withdraw from talks ‘within hours’.

As Barnier dismissed rumors about progress on the issue of fisheries, sentiment soured further after the pound tumbled 1.3% against the dollar, dropping as low as 1.3225 after hitting a high of 1.539 on Friday – the pound’s biggest drop in three months. Gilts are rallying, amid concern that trade negotiations could collapse on Monday when BoJo and von der Leyen hold a ‘check-in’ call in roughly three hours.

While the British will continue to negotiate for “as long as we believe a deal is still possible”, ruling out a continuation of talks next year could put pressure on the EU’s new reported strategy: wait for the UK to suffer the consequences of a ‘hard’ Brexit, which just might force UK leaders to come crawling back to Brussels.

Heading into what’s expected to be an intense week of negotiations as the US Congress tries to pass a new stimulus plan, Wall Street analysts have added the risk of Brexit talks collapsing to their list of “uncertainties” that could potentially dampen sentiment.

“There are uncertainties that weigh on sentiment – the US sanction on China, the US fiscal plan that’s yet to be endorsed, and a Brexit deal that didn’t happen over the weekend,” said Mohit Kumar, a strategist at Jefferies International. “Any pullback from last week may be shallow though as overall, I think the market remains optimistic that we will get a fiscal deal and a Brexit deal this week.”

According to the FT, Barnier told diplomats that talks are in the ‘final days’, with Wednesday serving as the new de facto deadline. Diplomats on both sides gamely insisted that a deal could still be reached. Other reports claimed talks rested “on a knife’s edge”

“The outcome is still uncertain, it can still go both ways,” said one diplomat following Mr Barnier’s briefings. “The EU is ready to go the extra mile to agree on a fair, sustainable and balanced deal…it is for the UK to choose between such a positive outcome or a no-deal outcome.”

As we wait for today’s call between BoJo and von der Leyen, here’s a quick rundown of the main sticking points, courtesy of the FT.

Meanwhile, both sides are ramping up preparations for what might happen if the talks fail, as new trade barriers might be joined by onerous restrictions on British financial markets, long seen as the financial epicenter of Europe.