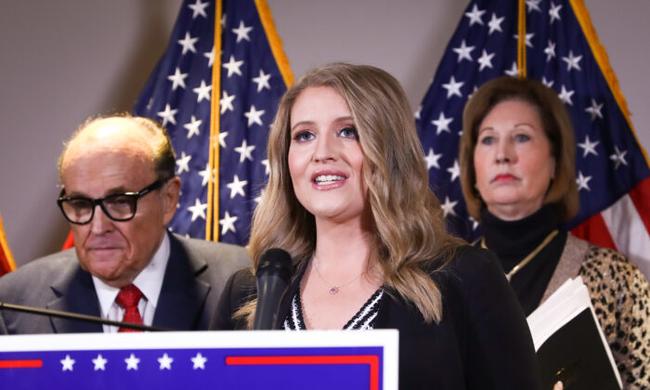 President Donald Trump’s legal team began a forensic analysis of Dominion voting machines in Michigan after a judge on Friday permitted the examination.

“Our team is going to be able to go in this morning at about 8:30 [a.m.] and will be there for about eight hours to conduct that forensic examination and we’ll have the results in about 48 hours, and that’ll tell us a lot about these machines,” attorney Jenna Ellis told Fox News on Sunday.

Ellis was referring to a ruling from a judge in Antrim County, Michigan, who authorized the audit of 22 Dominion Voting Systems machines, said Trump lawyer Rudy Giuliani.

It’s not clear which of the several election lawsuits the order originated from.

Later, Antrim County spokesperson Jeremy Scott told the Detroit Free Press that forensic images will be taken from voting machines used during the Nov. 3 election. Judge Kevin Elsenheimer issued the order regarding a challenge from voter William Bailey, who filed a lawsuit alleging that ballots were damaged in a recounting of ballots in a marijuana proposal that narrowly passed, reported Fox News. Elsenheimer’s order doesn’t mention the presidential race, and it’s not yet clear if the order allows Trump’s team to examine the machines.

The Michigan GOP last month noted that voting machines in Antrim County incorrectly switched 6,000 votes from Trump to Joe Biden. The Secretary of State’s office said it was due to a technical error and non-updated software, adding that the issue was later corrected.

Ellis, in the Fox News interview on Sunday, cast doubt on the Secretary of State’s claims, saying that it was “an unexplained and so-called ‘glitch.”

Jake Rollow, a spokesman for Secretary of State Jocelyn Benson, told the Detroit News that the judge’s order is not clear.

“However, what we know, and has been previously explained on numerous occasions, is that a human error by the Antrim County Clerk prompted results to be reported incorrectly,” said Rollow to the publication.

“Reporting errors are common, have no impact on tabulation, and are always caught and corrected in the county canvass if not before, as was the case in Antrim County.”

Dominion Voting Machines, in numerous statements, has vigorously denied that its machines can switch votes from one candidate to another and has also denied ties to other vote-tabulation software companies or foreign governments.

The Epoch Times has reached out to the Michigan Secretary of State’s office and Antrim County after Ellis’s Fox News interview.