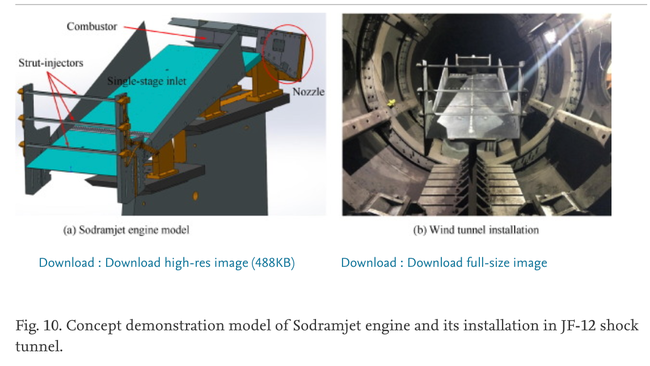 
Chinese scientists have built what they claim is a “revolutionary” hypersonic engine that could one day propel an airframe as fast as Mach 16, or about 12,300 mph, according to the South China Morning Post (SCMP), citing a new paper published in the Chinese Journal of Aeronautics.

The flight test of the hypersonic engine was conducted in a wind tunnel in Beijing suggested unprecedented thrust, fuel efficiency, and operational stability. Scientists believe the engine could operate at Mach 16, propelling an airframe across the world in just two hours.

The Chinese paper, titled “The criteria for airbreathing hypersonic propulsion and its experimental verification,” says the sodramjet (short for “standing oblique detonation ramjet engine”) is an “airbreathing propulsion” system “for future aerospace flight.” It has no moving parts and uses the plane’s speed to ram air into the engine, then blended with hydrogen fuel and detonated, discharging out of the back of the engine as thrust.

“Turning the shock wave from their enemy to their friend helped them sustain and stabilize combustion at hypersonic speed,” SCMP said. “The faster the engine flew, the more efficiently the hydrogen fuel burned. The new engine was also much smaller and lighter than previous models.”

Researchers noted, “the US government shifted the bulk of hypersonic research from Nasa to private companies such as Boeing and Lockheed Martin, and Morrison’s idea was largely if not completely forgotten by the American defense industry. The contractors put all their resources into scramjet design and continued to suffer setbacks that eventually caused them to trail other countries.”

“With reusable trans-atmospheric planes, we can take off horizontally from an airport runway, accelerate into orbit around the Earth, then reenter into the atmosphere, and finally land at an airport,” the scientist wrote. “In this way, space access will become reliable, routine, and affordable.”

A couple of years ago, China released a rendition of a hypersonic plane that could fly from Beijing to New York in 2 hours.

Could the sodramjet technology be used in this future plane?