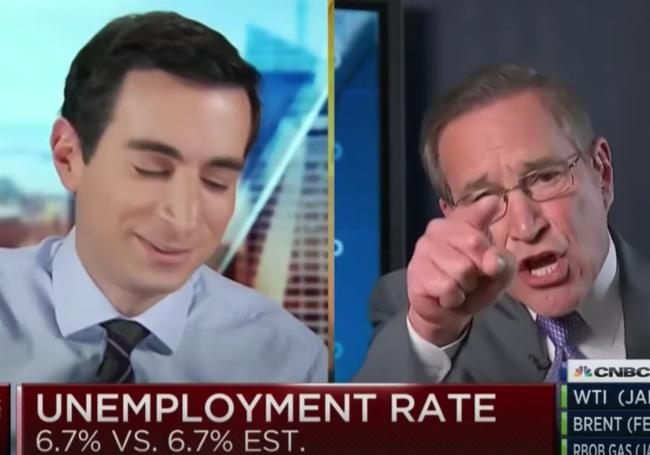 
Sparks flew on CNBC Friday morning as “Squawk Box” host and NYT Dealbook editor Andrew Ross Sorkin and fixed-income correspondent Rick Santelli – who provoked a media firestorm earlier this year for (only half-seriously) suggesting that people should just infect themselves with COVID-19 and get it over with – got into one of the most heated screamfests we’ve seen in a while.

It all started with a pre-jobs report discussion of the worsening employment picture for America’s retail workers, before things quickly took a turn for the dramatic.

“Why are those people any less safe in a restaurant with plexiglass…I think it’s really sad, when we look at the services sector…that particular dynamic should be studied more,” Santelli posited. “You can’t tell me that shutting down…which is certainly the easiest answer…is the only answer”.

A clearly galled Sorkin then launched into a patronizing diatribe about the differences between big box retailers, restaurants and churches, and why Santelli was doing viewers a “disservice” by disregarding the science”

“The difference between a big box retailer, and a restaurant – or frankly, a church – are so different it’s unbelievable,” Sorkin insisted.

An incredulous Santelli shot back: “500 people in a Lowes aren’t any safer than 150 people in a restaurant that holds 600…and I live in an area with a lot of restaurants that have fought back…and they’re open”

After some more screaming back and forth, Sorkin accused Santelli of avocating for people to go “packing into restaurants”, which is not what he said.

Santelli interjected: “I think our viewers are smart enough to make those decisions on their own!”

Sorkin continued to insist that he was merely trying to educate viewers about “the science” of COVID-19. Then CNBC economics correspondent Steve Liesman joined in, smugly asking “how’s that working out for you, Rick?”

“Just fine,” Santelli replied, before trying to explain that while he feels for every family that has lost a loved one to COVID-19, that simply exploring alternatives that might help keep everybody safe while also protecting small businesses and workers would be a wise move.

Before he could continue, Becky Quick jumped in to stop the fight, politely asking her three male colleagues to drop it, positing that they could shout at each other all morning and still wouldn’t get anywhere.

Later on in the morning, CNBC hastily went into damage control mode, deploying Jim Cramer, who frequently talks about how COVID has impacted his restaurant business, to calmly explain why people should continue to wear masks.

Though we must say: We’d really enjoy hearing Sorkin explain how Big Box stores are “completely different” from restaurants and churches. All three can be found in interchangeable strip malls across the country.

And at least as far as masks are concerned, research has painted what is in reality a pretty fraught picture.

A massive Danish study on mask usage found no statistically significant difference in coronavirus infection rates between mask-wearers and non-mask-wearers. In fact, according to the data, mask usage may actually increase the likelihood of infection. https://t.co/ijUy8hfNTY pic.twitter.com/gYDtA8ac0p

And the same goes for lockdowns, as the true cost to people’s lives and livelihoods is still be poorly understood.

Watch the fight in its entirety below: