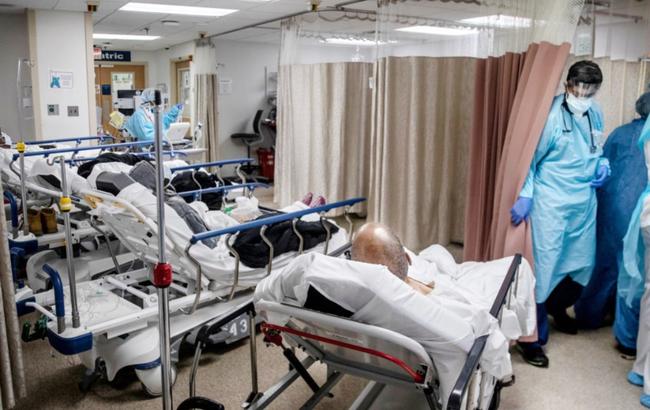 Update (1820ET): We’re getting some more dire numbers out of the US, as cases look set to surge in today’s nationwide tally following a new record in daily cases in Texas, and a record hospitalization tally in California.

California has a record 9,049 patients hospitalized with the virus after only recently exceeding levels from July. Now that California’s hospitalizations are back in record territory, the state is already acting, moving more counties into its most dire ‘purple’ designation, while Gov Gavin Newsom hints at another lockdown. In San Francisco, Mayor London Breed hinted at another lockdown, warning that more-stringent measures may be coming as soon as this week.

New Jersey reported 90 deaths, by far the most in more than six months. The state now has 15,254 lab-confirmed virus fatalities and 1,829 with an untested but probable link.

Meanwhile, the CDC has voted on a protocol for prioritizing the distribution of the first batches of COVID-19 vaccines.

Cuomo reminded New Yorkers that hospital capacity is a “top priority” and that orders have already been given to increase the number of available beds as hospitalizations in the state surge. These include a backup facility on Staten Island.

New York City is urging older adults and those with underlying health conditions to stay home and refuse any guests in order to moderate the spread of the virus. City hospitalizations have doubled in recent weeks and are now 1,100, the highest since June. The seven-day average of daily reported cases has climbed to 1,685, the highest since May. A month ago, the daily case average was 621. The percentage of people testing positive continues to climb, to a seven-day average of 4.14%.

It’s evening in Western Europe, and Denmark has become the latest country to impose new restrictions that will hit the greater Copenhagen area and take effect next week. Denmark is struggling to contain the latest surge in cases, while in the Netherlands, right next door, authorities revealed that new cases dropped 8% over the past week, attributing their success to the COVID-19 measures.

As warnings about a “long dark winter” ahead intensify, with the NYT once again quoting scientists projecting death tolls and case tallies several times larger than what we have seen already, hospitalizations in the US have hit a new record high with more than 96k patients admitted to hospitals around the country.

However, even as daily tests now top 2 million, the number of new cases in the US is still falling, continuing an incipient trend that started just before the Thanksgiving holiday.

Still, the alarming surge in hospitalizations over the past month would suggest that higher death tolls might be in store, as rural hospitals are overwhelmed by the crush of severely ill patients.

Meanwhile, the biggest news on the vaccine front has to do with Pfizer’s latest vaccine development: the company has officially filed for emergency use approval in the EU on Tuesday – after making the same request of authorities in the US last week.

Outside the US, Vietnam Prime Minister Nguyen Xuan Phuc has ordered the country’s aviation authority to halt international commercial flights after health authorities reported the country’s first local cases in almost three months, according to a posting on the government’s website. The premier – who added that  “rescue” flights bringing Vietnamese home from abroad should continue – instructed the Ho Chi Minh City government to quickly trace and isolate everyone who came in contact with those who tested positive this week.

Here’s a roundup of COVID news from around the world and in the US:

Ireland, one of the first countries in western Europe to return to lockdown in late October, began reopening its economy on Tuesday. Non-essential stores welcomed shoppers back. Restaurants will reopen later this week, as well as bars serving food. Bars that only serve drinks will remain closed (Source: Bloomberg).

Jean Stephenne, chairman of German biotech company CureVac NV, said he is confident the company’s Covid vaccine will be ready in the first quarter of 2021, and there is no reason to suggest its efficiency won’t match that of rivals. “We’re running a few months behind Pfizer, but confident on prospect for February-March,” he said (Source: Bloomberg).