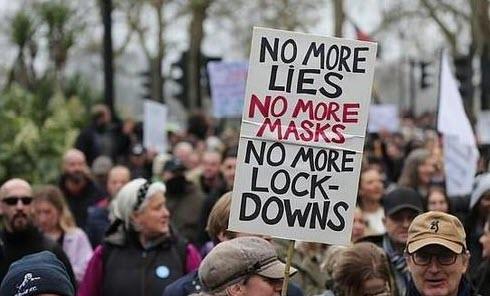 
Today in “resistance is futile” news…

The British Army’s Information Warfare Unit is being deployed to deal with “anti-vaccine propaganda” heading into the rollout of the vaccine, The Daily Mail reports. The unit was launched in 2010 and is part of the Army’s 77th Brigade, which “often works with psychological operations”.

In fact, “solders are already monitoring cyberspace for Covid-19 content”,  the report reveals. The move comes as a response to a growing number of both anti-lockdown and anti-vaccine protests. Late last week, for example, more than 155 anti-lockdown protesters organized in Central London, marching through Westminster and chanting “shame on you” and “freedom”.

Others waved signs reading “All I want for Christmas is my freedom back”, “Ditch the face masks” and “Stop controlling us”. The country is implementing similar fines and restrictions for businesses as the U.S. government. And, similarly, businesses are starting to take matters into their own hands and defy lockdown orders.

In the U.S., many business owners are now clinging to the constitution. In the U.K., many are “using the Magna Carta as a defense – quoting an article that allowed Barons to ignore unfair rules in the 13th Century.”

Some in the country have said they will refuse the vaccine and will do the same for the children. Others have called it a “mass sterilization program”. Other Brits simply “feel the Government is wielding too much power,” the Daily Mail notes.

The country is also launching a probe into “vaccine disinformation”, including an investigation into (of course) Russia.

A Cabinet Office spokesman said late last week:  “As we edge closer to a vaccine we continue to work closely with social media companies and other organizations to anticipate and mitigate any emerging anti-vax narratives and promote authoritative sources of information.”