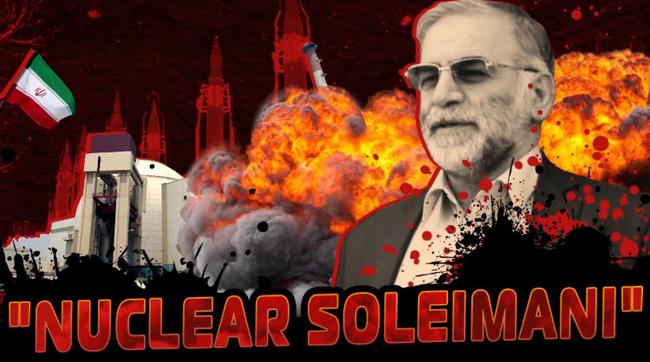 US President Donald Trump is apparently set to slam the door and go to great lengths to show love to his friends in Tel Aviv before withdrawing from the White House.

On November 27, Mohsen Fakhrizadeh, a prominent Iranian professor of physics and quantum field theorist, was assassinated near the Iranian capital of Tehran. Formally, Fakhrizadeh was the head of its Organization of Defensive Innovation and Research, while Israel and the U.S. insist that he headed the Iranian nuclear weapons program.

Israeli media even called Fakhrizadeh “the Nuclear Soleimani” referring to the commander of the Iranian Qods Force, who was assassinated by a US drone strike in Iraq on January 3, 2020. That assassination almost led to a US-Iranian war and the White House even swallowed a ballistic missile strike on its bases in Iraq, while Iranian air defense forces accidentally shot down an airliner near Tehran. Fortunately, a larger war was avoided, but the region entered into a new spiral of tensions between the Israeli-US bloc and Iranian-led forces. The November assassination did not trigger an immediate military response from Tehran, but there are little doubts that it will also have negative consequences for regional stability.

According to US and Israeli media, the development of the Iranian nuclear program requires the following factors: time, money and specialists.

Initial reports say that the car of Fakhrizadeh was targeted by a car bomb explosion and then was subjected to gunmen fire at Absard city. According to the Iranian Defense Ministry, Fakhrizadeh “was severely wounded in the course of the clashes between his security team and terrorists and was transferred to a hospital,” where he later succumbed to his wounds. Later it appeared in the unofficial version of events, claims that the attackers used a remotely-controlled machine gun that was installed in the trunk of a Nisan pickup. Then, the pickup and the gun were detonated. The Iranian Fars News report insists that the entire attack lasted for only 3 minutes and that no gunmen were involved.

The assassination demonstrates the particular gaps in the security of such prominent and high-ranking persons. It is no secret that the life of Fakhrizadeh was under threat for years, but he still moved around the country with a small security team with only two cars, and his car was not even armored. This posture may be partly explained by the cult of martyrdom on the all levels of Iranian society and the fact that Iranian officials are pretty close to ordinary people, especially in comparison with other Middle Eastern states. These factors allow the current political regime in Iran to resist unprecedented sanctions, political and even military pressure from its opponents, but at the same time creates additional security difficulties.

Immediately after the assassination, the Iranian Revolutionary Guard Corps and the Army were put on high alert and top Iranian officials vowed to take revenge for the attack. Also, on November 29, the Iranian Parliament decided to speed up the consideration of the bill that supposes to increase the level of uranium enrichment. As a “double urgency”, it was ratified with 232 votes from a total of 246 MPs attending the session. The final vote on the adoption of the law may take place on December 2. The bill states that Iran would now produce at least 120kg of uranium enriched to 20% per year. In comparison, the Iranian nuclear deal, from which the Trump administration unilaterally withdrew, allowed Iran to enrich uranium to a maximum of 3.67%. In addition, under the bill in consideration, the government will have to put in operation one thousand additional centrifuges at the Natanz and Fordo nuclear facilities within a year. The bill also supposes an immediate return to the project for the reconstruction of the Arak nuclear reactor, which existed before the signing of the nuclear deal. Therefore, instead of slowing down the Iranian nuclear program, the assassination of Fakhrizadeh led to a public increase of the Iranian activity in the field. The United States and Israel will likely call these actions a great threat to global security and state that they are obliged to respond to the growing Iranian threat.

The only question is what do the Israeli and US leadership expect? Did they really believe that after the years of resistance and regional standoffs, that the Iranians would surrender after an assassination of one of their scientists?