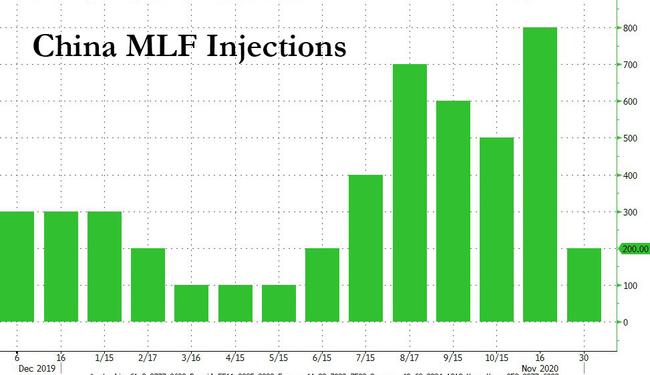 
Back in late 2019, we were frequently greeted by headlines such as this, indicating that PBOC was periodically making “unexpected” liquidity injections, which made sense in light of China’s ongoing economic slowdown:

Fast forward one year, when China’s economy is supposedly growing at a blistering pace thanks the massive credit injections following the covid pandemic – or so Beijing and various PMI surveys would would indicate, with the November NBS manufacturing PMI overnight rising to 52.1 from 51.4 in October (all sub-indexes in the NBS manufacturing PMI survey implied stronger growth momentum in November) while the NBS non-manufacturing PMI rising further to 56.4 from 56.2 in October on the back of stronger services and construction PMIs….

… and yet the same telltale signs that not all is well with China’s economy are back, with Bloomberg posting a deja vu report this morning that China “unexpectedly” – there’s that word again – added yet another injection in the form of medium-term funding to the financial system on Monday “as the central bank sought to ease liquidity tightness in the final weeks of the year.” Perhaps China’s economy is not nearly as strong as the “pristine” indicators would make us believe?

Specifically, the People’s Bank of China offered 200 billion yuan ($30 billion) of the medium-term lending facility at an unchanged rate of 2.95%, according to a statement Monday at the same time that Beijing reported the latest blistering PMI numbers.

The latest injection came just two weeks after the central bank offered 800 billion yuan of the funds, which were already more than enough to offset the 600 billion yuan that were due this month.

“The MLF injection is a surprise,” said Zhaopeng Xing, a markets economist at Australia & New Zealand Banking Group. “It shows the central bank aims to ensure liquidity without using broader easing measures like a reserve-ratio cut, when the demand for medium-term cash surged.”

Curiously, even as Chinese post-pandemic economic recovery is blowing away expectations, widespread concerns over tighter cash supply have sent China’s benchmark sovereign yield to its highest level since May 2019 earlier in November…

… resulting in record wide spreads between US and Chinese 10Y yields.

Even more curious is the consensus explanation for the sharp rise in Chinese yields: according to Bloomberg, “the central bank’s drip-feed approach to offering funding has compounded” the lack of liquidity “indicating Beijing wouldn’t want to loosen monetary policy much more amid a growth rebound.”

But if the economy is so strong, which does China even need more liquidity: after all, the 10Y yield is – in theory – rising because of higher inflation expectations over the horizon, and yet the PBOC feels compelled to enter the market “unexpectedly” every other week to prevent sentiment from turning sour.

Maybe what’s going on is that the liquidity squeeze is the real story, and the so-called economic recovery is the latest goalseeked lie out of Beijing.

Recall that China is already facing a major funding squeeze, with the nation’s banks grappling with a $900 billion funding gap this month and next because of a need to repay at least 3.7 trillion yuan of short-term interbank debt and purchase 1 trillion yuan of newly issued government bonds. Also, 600 billion yuan of previously offered MLF loans will mature in December. The recent “unexpected” default of several SOE companies has added to the stress, with non-bank financial institutions finding it hard to fund themselves in the interbank market.

Rabobank’s Michael Every put it best when discussing the quantum states of the global newslow (China’s economy surging in one collapse of the wave function; China’s economy desperate for liquidity in the other), writing the following:

China’s economy continues to power ahead, with bumper net exports and capital inflows and industrial profits all being recorded: and yet the PBOC just had to inject CNY200bn (USD30bn) in MLF a month ahead of the end of the year to ease liquidity tightness, and that on the back of CNY800bn two weeks ago. Yes, this is gross not net: but why the need for so much PBOC help when everything is going so well? Perhaps because Chinese banks are still trying to repay CNY3.7 trillion of short-term interbank debt and purchase CNY1 trillion of government bonds and repay maturing MLF injections,…and are worrying about SOE bond defaults.

As Every rhetorically summarizes “everything is going so well though: there just isn’t any cash as a result” and concludes with a bad quantum physics pun: “Isn’t the most dangerous part of the Heisenberg below the water?“

How much longer can Beijing pretend that the economy is remarkably strong… if only there was a few hundred billion more in liquidity sloshing around. Probably at least until the January inauguration event. After that, non-quantum reality may finally have to reassert itself.