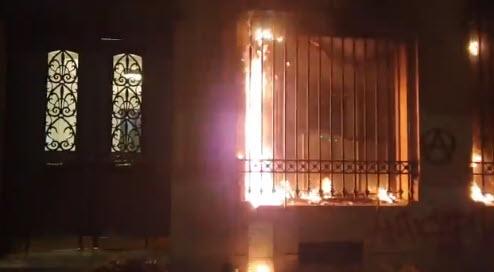 
One of the recurring questions amid the year’s countless BLM protests and associated riots has been why instead of burning and looting innocent businesses, the angry mob does not target the source of all wealth, income and social inequality – not just in the US but the world – the central bank, i.e. Federal Reserve (located at 2051 Constitution Ave. NW, Washington, DC 20418 for those unaware).

Yet while US protesters and rioters still need guidance what buildings to burn down, their French peers are finally catching on.

Over the weekend, tens of thousands of critics of a proposed security law that would restrict the filming of police officers protested across France on Saturday, and officers in Paris who were advised to behave responsibly during the demonstrations repeatedly fired tear gas to disperse rowdy protesters. The controversial Article 24 of the bill seeks to protect police officers from doxing and harassment, and bans filming of cops on duty and sharing their images online with the “intent to harm.”

Civil liberties groups, journalists, and people who have faced police abuse are concerned that the measure will stymie press freedoms and allow police brutality to go undiscovered and unpunished.

“We have to broaden the debate, and by doing that, we say that if there were no police violence, we wouldn’t have to film violent policemen,” Assa Traore, a prominent anti-brutality activist whose brother died in police custody in 2016, told The Associated Press.

Violence erupted near the end of the march as small groups of protesters pelted riot police with small rocks and paving stone. The officers retaliated with volleys of tear gas, prompting minor scuffles.

What we found most remarkable is that as rioting escalated, the protesters did something they have never done before (to our knowledge): they set fire to the facade of the central bank building in Paris.

While fire crews reached the central bank building on time, and it did not spontaneously collapse “due to the high temperatures” unlike some other structures, one wonders what happens during the next protest, or the one after. And when will US protesters figure out what the French already have: that burning and looting stores owned by fellow hard-working citizens only exacerbates the inequality. On the other hand, to really make a statement, a couple of Molotov cocktails aimed at the Marriner Eccles building just may attract some attention.