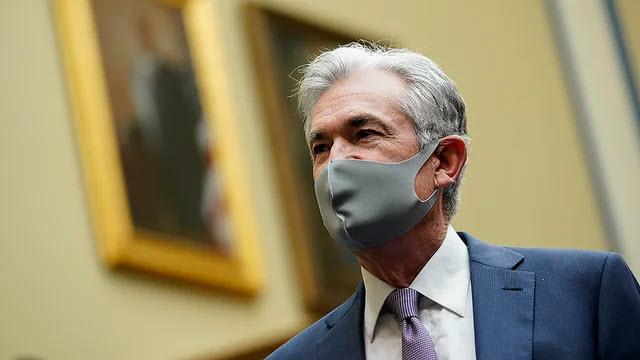 
In what was largely a repeat of his Nov 12 comments to a panel hosted by the ECB, Fed Chair Powell warned lawmakers that the US economy remains in a damaged and uncertain state, despite progress made in the development of Covid-19 vaccines, urging them once again to release much needed fiscal stimulus.

“Recent news on the vaccine front is very positive for the medium term,” Powell said in prepared testimony released Monday ahead of a Tuesday hearing before the Senate Banking Committee, although in order not to overplay the optimism – since that may shut down hopes for any new stimulus bill, he said that “significant challenges and uncertainties remain, including timing, production and distribution, and efficacy across different groups.”

As a result, “the outlook for the economy is extraordinarily uncertain and will depend, in large part, on the success of efforts to keep the virus in check.”

And while economic activity “has continued to recover from its depressed second-quarter level” in recent months “the pace of improvement has moderated” Powell said, in what is a preamble for the latest request for a few trillion in fiscal stimulus funds, which the Fed promises to quickly monetize. Whether or not Congress agrees to release the funds will likely depend on the outcome of the Georgia’s runoff elections in January, which will decide the composition of the Senate.

Tomorrow’s hearing will be the first appearance of Powell and Treasury Secretary Steven Mnuchin together since they disagreed over the expiration of several emergency loan programs set up after the pandemic hit in March.

Commenting on the Fed’s “13(3)” emergency facilities, Powell said that these programs “serve as a backstop to key credit markets and have helped restore the flow of credit from private lenders through normal channels. We have deployed these lending powers to an unprecedented extent. Our emergency lending powers require the approval of the Treasury and are available only in very unusual circumstances, such as those we find ourselves in today. Many of these programs have been supported by funding from the Coronavirus Aid, Relief, and Economic Security Act (CARES Act).”

Powell also said that the Fed’s Main Street Lending Program – while not widely used currently – “offers a credit backstop for firms that do not currently need funding but may if the pandemic continues to erode their financial condition.”

That said, Powell admitted that the CARES Act assigns sole authority over its funds to Mnuchin, writing that “the Secretary has indicated that these limits do not permit the CARES Act-funded facilities to make new loans or purchase new assets after December 31 of this year. Accordingly, the Federal Reserve will return the unused portion of funds allocated to the lending programs that are backstopped by the CARES Act in connection with their termination at the end of this year. As the Secretary noted in his letter, non-CARES Act funds in the Exchange Stabilization Fund are available to support emergency lending facilities if they are needed.”

In his own set of prepared remarks, Mnuchin said that he continues to believe “that a targeted fiscal package is the most appropriate federal response” and he strongly encourages Congress “to use the $455 billion in unused funds from the CARES Act to pass an additional bill with bipartisan support” adding that the Administration is standing ready to support Congress in this effort to help American workers and small businesses that continue to struggle with the impact of COVID-19.

Mnuchin announced earlier this month that those Fed programs must sunset at the end of December, and asked the central bank to return unused funding authorized for the programs by Congress. The Treasury also said it plans to move that unspent money into its general account, over which Congress has authority.