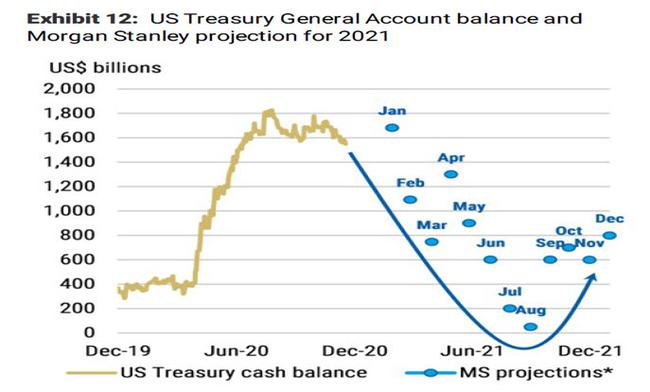 
One of the most poignant (and painful to some) lessons of the past decade – especially to contrarian, bearish investors such as Odey and Horseman – is that the Fed can keep print money far longer than any short can remain solvent. And while it was considered in poor taste until earlier this year to admit that the market levitation is entirely due to the Fed’s manipulation of markets- a task best left to fringe, tinfoil wearing blogs – all pretense disappeared after Jerome Powell nationalized the bond market in March, and just last week Morgan Stanley’s chief rates strategist, Matthew Hornbach, admitted that central bank liquidity is the most critical component of rising macro markets: “It both greases the wheels of transactional finance and changes the opportunity set available to investors.”

It’s also why Morgan Stanley has been especially bullish on markets in 2021: as Hornbach summarized it simply: “When it comes to liquidity, our focus is on both “narrow” and “broad” measures… We expect both types of liquidity to expand in 2021.“

Last Monday we discussed the expansion of the first type of liquidity, namely that provided by central banks. The math was, in a word, staggering: combined, the 8 DM central banks are expected to purchase US$304 billion of securities ($238 billion of which will be government bonds), on average, from private markets every month in 2021 (with the Fed and the ECB naturally doing most of the buying).

Putting this number in context, in total these 8 central banks are expected to add liquidity worth 0.7% of annual nominal GDP, on average, every month in 2021. “That is a rapid pace of global liquidity injection, the likes of which we haven’t seen outside of 2020” Hornbach casually inserts.

What is even more striking is that this may not be enough: as we showed two weeks ago, after the Fed monetized virtually every dollar of net Treasury issuance in 2020, in 2021 Treasury supply will significantly outstrip Fed purchases (and this is even without factoring in the possibility of another major fiscal stimulus).

Said otherwise, while the Treasury faces net Treasury issuance of roughly $2.4 trillion, the Fed is expected to monetize less than half of this total, or $960 billion. Considering that in 2020 under the auspices of “helicopter money” (from which we remind readers there is simply no coming back) the Fed will have monetized virtually every dollar of net issuance, this is a huge cliff and one which could lead to a shock drop in Treasury prices if the market reprices (lower) its expectations for Fed monetizations.

In other words, the Fed needs to more than double its scheduled monthly QE in 2021 just to catch up to where it was in 2020; and the Fed is hardly alone – in just the past month, the RBA, the BOE and most recently, the Riksbank, all announced expansions to their current QE.

And here comes the twist, because in what may come as a surprise to some, in 2021 liquidity injections won’t be limited to QE.

As traders who lived through the reserve squeeze of Sept 2019 recall all too vividly, central bank purchases of securities via QE aren’t the only way liquidity can find its way into markets. In the US, the Treasury can increase liquidity by allowing its cash balance – held at the Federal Reserve – to decline. When Treasury issues debt, it can either spend the money on government mandates or it can keep the money in its checking account at the Fed, known as the Treasury General Account (TGA).

However, as Hornbach reminds us, 2020 was unique in that Treasury issued lots of debt without spending the money, resulting in over $1.6 trillion in Treasury cash available for deployment at a moment’s notice, yet due to Congress’ inability to reach agreement on a fiscal stimulus, this money was never spent (and may have cost Trump a victory in the election).

As a result, the cash balance in the TGA increased dramatically, resulting in a massive liquidity drain; in fact were it not for other sources of liquidity injection – such as the Fed injecting hundreds of billions with monthly periodicity – that may have been a huge problem for markets. In any event, as the chart below shows, despite the Treasury’s liquidity drain reserves increased in 2020 regardless, surpassing a record $5 trillion.

So what happens in 2021 with all this cash already sloshing around?

This means that based on the 2019 debt ceiling, the Treasury cash will need to be at $200 billion by August 1, 2021. As such, there will be significant T-bill paydowns in 2021 through August in order for Treasury to reduce its cash balance – leading to a massive increase in reserves which is entirely apart from those injected via Fed QE, which continues at a pace of $120 billion per month. With the TGA cash currently at just under $1.5 trillion, it means that the US Treasury will unlock $1.3 trillion in liquidity over the next 8 months, more than doubling the liquidity coming from the Fed over the same time period which will be roughly $1 trillion ($120 x 8 months)!

We hope this massive liquidity injection explains why Biden was so interested in getting a former Fed chair – Janet Yellen – in charge of the Treasury. After all, the amount of liquidity to be injected by the Treasury Department will match, almost dollar for dollar, what Jerome Powell will do in 2021.

So when will this liquidity impact markets?

The Fed first announced its QE-driven foray into liquidity provision on Sunday, March 15, and as Morgan Stanley notes, “it took a couple weeks for the liquidity to flow to where it was needed most: the S&P 500 bottomed and the Fed’s broad trade-weighted US dollar index topped on March 23.”

Since then, the US dollar index has lost 9.4% and the S&P 500 index is up 60%. In addition, US 10y real yields have fallen 100bp while 10y breakeven inflation rates have risen 100bp. In that sense, the injection of liquidity in 2020 has already had an immense impact on markets.

As we saw ahead of the US election, US$ 1 trillion found its way into money market funds (MMFs), given the uncertainty of a well-telegraphed risk event. However, according to Hornbach, in 2021, the sheer size of liquidity entering markets will make it hard for investors to keep it sitting in cash accounts, earning next to nothing. And, given virtual guarantees that most central bank policy rates will remain at effective lower bounds (ELBs) in 2021, and many will remain there in 2022 as well, Hornbach concludes that “investors will have a (performance) incentive to move cash into higher yielding assets.”

In the end, it’s not possible for us to say exactly when the liquidity will impact market prices throughout the year. Still, once the race for returns begins as we enter the new calendar year (the new fiscal year for many investors), we expect liquidity to venture out of its safe-haven cash-cave – just as long as new, unforeseen uncertainties aren’t mounting at the same time.

Pantera plans to raise $1.25B for second blockchain fund: Report

Hacks And Data Leaks Are Plaguing Web3 – Is There a Cure?