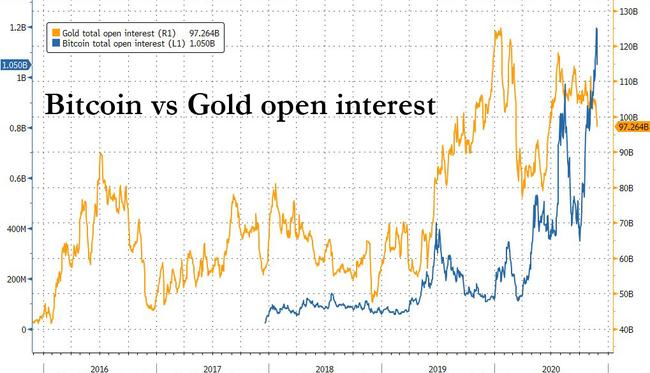 
After relentlessly climbing from its March $4,900 lows, Bitcoin finally saw a modest selloff last week after rising 285% from its lows and 160% since the start of the year prompting even establishment banks such as Deutsche Bank to include it in its grouping of key asset categories…

… leading to the now traditional kneejerk response from bitcoin haters such a Nouriel Roubini, who took a bizarre 12-tweet “victory lap” late Thursday as if bitcoin dropping 20% from just shy of its $20K all time high somehow validates his forecast…

So on Thanksgiving don’t be a headless Turkey fool/sucker being duped by manipulative whales, crooks, scammers, carnival barkers, front-running criminal exchanges that just want to steal your savings/ wealth. Stay away from the cesspool of 1000s of worthless shitcoins. 12/12

… which recall is that bitcoin would “crash to zero” (from his February 2018 CNBC appearance), or that it is a “stinking cesspoll that is in meltdown“, when it suffered a similar drop in October of that year, and just generally emerging from the woodwork every time there is a drop in bitcoin as per this tweet.

In due time Bitcoin will get close to zero. The bubble has already burst and crash as in 6 months Bitcoin has lost almost 80% of its value, from 20K to close to 6k. Another 90% down eventuall still to come. Whales are dumping their shit-bitcoin & suckers bagholders already wiped https://t.co/VMWVclCgsh

Incidentally anyone who bought bitcoin in February of 2018 when it was supposed to “crash to zero” is up 150%, outperforming the S&P 4-fold. Then again, by now the market has learned to take Roubini’s “hot” takes – which only emerge during sharp bitcoin and gold selloffs – with all the “seriousness” they merit. After all, this is the same Doctor Doom who in 2009 infamously said that “all the gold bugs who say gold is going to go to $1,500, $2,000, they’re just speaking nonsense. Yeah, it can go above $1,000, but it can’t move up 20-30 percent unless we end up in a world of inflation or another depression.”

Guess we must be living in a world of inflation or another depression… contrary to what Keynesians such as Roubini would like us to believe.

Roubini’s dime-a-dozen opinions and meltdowns aside, what really matters is when someone puts their crypto money where their mouth is. Examples of this include the publicly traded business-intel firm MicroStrategy, which on August 11 poured all $250 million of its planned inflation-hedging funds into the digital currency. Its stock is up 120% since then.

Another example is when Jack Dorsey’s “other” company, Square, said in October it bought 4,709 bitcoins, worth approximately $50 million, about 1% of Square’s total assets. “Square believes that cryptocurrency is an instrument of economic empowerment and provides a way for the world to participate in a global monetary system, which aligns with the company’s purpose,” the company said in a release. Square founder Jack Dorsey has been a advocate of the digital currency, saying in 2018 the cryptocurrency will eventually become the world’s “single currency.” However the founder of Twitter said it could take a long as a decade.

Or it may take far less than that, especially after PayPal announced a few weeks later that it had enabled crypto transactions for all its clients, sparking the latest leg higher in bitcoin.

Which begs the question: whereas in 2017 it was all the rage to pivot to “blockchain”, we wonder how long before every public company converts some (or all) of its cash and equivalents into bitcoin similar to MicrosStrategy and Square, in hopes of reaping a quick surge in its stock price. And tangentially with that, how long before established asset managers do the same?

This morning we get an answer when Guggenheim Partners, one of the world’s biggest fixed income asset managers, jumped on the bitcoin bandwagon when it announced – appropriately enough one day after Roubini’s bitcoin meltdown – that it was reserving the right for its $5.3 billion Macro Opportunities Fund, which aims for total return via fixed income and other debt and equity securities, to invest in the Grayscale Bitcoin Trust, whose shares are solely invested in Bitcoin, and track the digital asset’s price less fees and expenses.

“The Guggenheim Macro Opportunities Fund may seek investment exposure to Bitcoin indirectly through investing up to 10% of its net asset value in Grayscale Bitcoin Trust,” the firm said in a Friday filing ; in other words Guggenheim can (and probably will) allocate up to $530MM to bitcoin.

Guggenheim’s announcement means that its CIO Scott Minerd joins such legendary traders as Paul Tudor Jones and Stan Druckenmiller, who have already said they’ve put money into the digital asset. More importantly he ensures that laughably clueless hacks, who have zero comprehension of how money or markets operate, will be busy bashing bitcoin for years to come as the cryptocurrency hits $100,000 then $1 million and so on.

Guggenheim’s filing, which describes cryptocurrencies as “digital assets designed to act as a medium of exchange,” also lists a wide variety of risks. Those include prices that “can be highly volatile,” regulatory changes, a crisis of confidence in the Bitcoin network, a change in user preference to competing cryptocurrencies, and trading on “largely unregulated” exchanges that may be more exposed to fraud and failure than regulated, established bourses for other asset classes.

In other words, nothing new for anyone who has been long the cryptocurrency over the past few years, and certainly nothing new for regular readers who bought bitcoin as per our advice back in September 2015 when it was trading just over $200.

What is surprising is that Guggenheim is – for now – sticking only to the Grayscale ETF as a source of crypto exposure: “Except for its investment in GBTC, the Fund will not invest, directly or indirectly, in cryptocurrencies.”

We expect that will change soon: after all in the past few weeks, bitcoin futures’ open interest surpassed gold’s for the first time ever…

… as the investing public increasingly turns to crypto as an alternative to the tsunami of fiat currency debasement and ahead of the central banks’ launch of digital currencies some time in 2022.