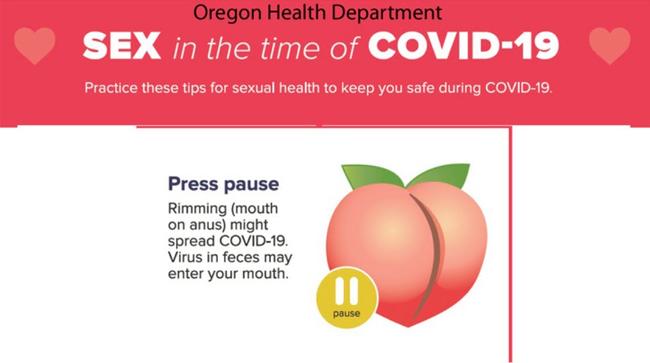 
Authored by Jim Bovard via The Libertarian Institute,

Politicians and petty czars have canceled Thanksgiving across the nation.  What have government health departments offered in lieu of a family gathering? Endless idiotic advice for “safe sex” during COVID.

The Vermont Department of Health captured the ethos of many health departments across the nation: “Decisions about sex and sexuality need to be balanced with personal and public health.” COVID Federal Superstar Anthony Fauci reflected that judgment when he declared in April that those who meet strangers for sex via Tinder or other dating apps are entitled to make their “choice regarding a risk.” Many government officials have been far more tolerant or even encouraging of risky sexual relations during the pandemic while mercilessly suppressing other social and economic relations.

New York Gov. Andrew Cuomo is an Emmy-award winning hero of the COVID pandemic, regardless of the ten thousand elderly New Yorkers who died after he ordered nursing homes to admit COVID patients. Cuomo’s endless restrictions have been spurred by his view that “government can be a force for good,” as a New Yorker profile recently noted.

California Governor Gavin Newsom has become infamous for his bizarre list of Thanksgiving prohibitions to fight COVID. But the pandemic has uncorked other official weirdness in the Golden State.

The San Francisco Department of Public Health took preemptive action to re-define “premature” out of existence. The local bureaucrats advised: “Quicker can be better. The longer we are within 6 feet of someone, the greater the risk.” Will health departments take the next step, promoting Revolutionary Era imagery celebrating the return of the “Minute Man”?

As part of its recommendations for “navigating the landscape of love,” San Francisco bureaucrats urged to “embrace dirty thoughts. And clean surfaces.” The guidance stresses the importance of cleaning “shared toys,” especially when switching “collars” and similar items from one body to another. The department also noted: “When it comes to COVID-19 risk, outdoors is better than indoors.” Considering that the local government already permits homeless people to perform any other bodily function on Market Street, adding copulation might not be that much of a change in the local scenery.

The Fenway Health Center, a “Federally Qualified Community Health Center,” served up bad news to spatially-challenged Bostonians: “Using the social distancing recommendation of 6 feet, oral sex may still put you at risk of COVID.” Bizarrely, the Fenway Center urges people NOT to wear masks during hook-ups: “Leave the protective gear to the medical professionals and those who have the virus.”

In the same way that politicians focused myopically on COVID transmission risks to justify inflicting vast collateral damage on the economy, health departments offer recommendations that might avoid COVID transmission but could be otherwise ruinous.  Instead of meeting sex partners online, the New York City Health Department recommends, “Video dates, sexting, subscription-based fan platforms, sexy ‘Zoom parties’ or chat rooms may be options for you.” Other health departments made similar recommendations.

Since the pandemic began, politicians have claimed a prerogative to micro-manage citizens’ lives with one harebrained edict after another. For instance, Pennsylvania Governor Tom Wolf decreed on November 17 that people must wear masks in their own homes whenever someone visits who does not live in that household. On Monday, Gov. Wolf banned all alcohol sales in bars and restaurants on Thanksgiving Eve – a completely arbitrary edict that sows havoc and will do nothing to make COVID vanish.

Wolf would never dare to outlaw sex outside of wedlock but somehow politicians captured the right to throttle almost every other aspect of people’s lives. But a “copulation exemption” to the de facto COVID cancellation of the Bill of Rights makes no sense. People deserve as much freedom to drink rancid Rolling Rock beer on Thanksgiving Eve as they do to throw the Philly dice for a Tinder Thanksgiving treat. When politicians are permitted to selectively nullify freedom, the injustices will be exceeded only by the absurdities.