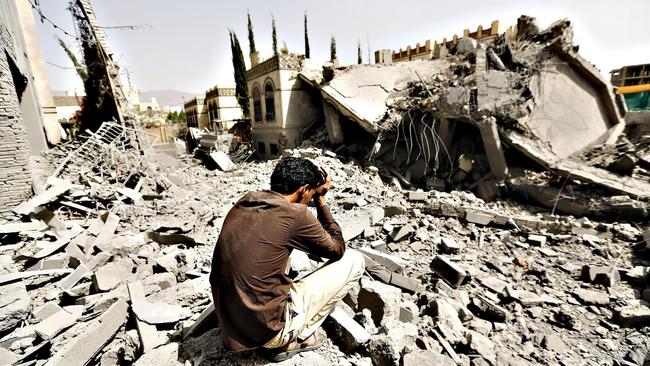 
Since 2015 the Saudi coalition which has been bombing Yemen back to the stone age with the close cooperation of the Pentagon has essentially gotten a “free pass” by the mainstream media, despite the United Nations within the past two years classifying the war as the world’s “worst humanitarian disaster”.

International rights groups and press reports commonly estimate the death toll at over 100,000 and with some putting it at up to a quarter million people killed, with a large percentage being civilian deaths.

A recent report from In These Times included the following appeal to President-Elect Joe Biden ahead of him taking office on January 20:

One thing Biden can do, start­ing on day one, is end U.S. involve­ment in the Yemen war — involve­ment that he helped ini­ti­ate. ​“By exec­u­tive order, Biden could get the Pen­ta­gon to end intel­li­gence shar­ing for the Sau­di coali­tion airstrikes, end logis­ti­cal sup­port, and end spare parts trans­fers that keep Sau­di war­planes in the air,” Has­san El-Tayyab, lead Mid­dle East pol­i­cy lob­by­ist for the Friends Com­mit­tee on Nation­al Leg­is­la­tion, a pro­gres­sive orga­ni­za­tion, tells In These Times. ​”He could restore human­i­tar­i­an assis­tance to north­ern Yemen. He could use his pow­er as pres­i­dent to put pres­sure on oth­er nations that are sup­port­ing the Sau­di coali­tion — like France, the Unit­ed King­dom and Cana­da — and get them to fol­low suit. He could have the State Depart­ment put a stop on all arms sales to Sau­di Ara­bia unless they meet cer­tain benchmarks.”

But given he’s stacked his top national security posts with Liberal Hawks, some of which had an active hand in forming the interventionist policies in Libya and Syria under Obama and his Secretary of State Hillary Clinton, this is very unlikely.

Yemen has long been the “forgotten war” and will likely remain so, and all the while major defense contractors (tied closely to the incoming administration) will rake in the cash.

Will Biden finally end the Yemen War which he and Obama started in the first place?  The Grayzone delves into this very question in its latest interview:

The segment introduces: “On the campaign trail, Joe Biden pledged to end US support for the Saudi-led war on Yemen, which the Obama-Biden administration authorized in 2015. Shireen Al-Adeimi, assistant professor of education at Michigan State University, discusses Biden’s responsibility to end the world’s worst humanitarian crisis.”