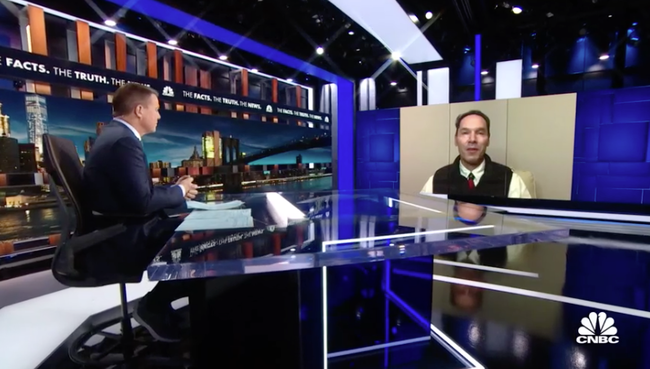 
Two Americas were visible on Tuesday as the Dow Jones Industrial Average crossed 30,000 for the first time. Simultaneously, hundreds of vehicles were snaked around a parking lot in Albuquerque, New Mexico, waiting in line at a local food bank.

This suggests the K-shaped economic recovery, one where the rich grow richer and the working-poor are crushed with job loss and insurmountable debts, is getting much worse by the month.

For more on the rapid reemergence of food bank lines, or what will be the new normal in a severely broken economy that is in desperate need of structural reform, Eric Cooper, CEO of the San Antonio Food Bank in Texas, on Tuesday, told CNBC’s Shepard Smith that demand at his food bank has more than doubled this year.

“Pre-pandemic we fed about 60,00 people a week and now we’re seeing about 120,000 per week, and most of those are new to the food bank, and have never had to ask for help before,” Cooper told Smith during an interview on Tuesday evening.

He said, “today, we had a distribution that fed 2,000, and we have these distributions all the time.”

“Food banks around the country have seen this unprecedented demand, and we’re just working as hard as we can to balance the private donations we get, with the public assistance to try to make sure people are fed,” he explained.

Cooper continued: “A child would miss ten meals in a week, and if a mom has two to three kids in school, she’s now feeling the impact of the cost of that food at home, and without employment, kids are going hungry. We hear from schools that kids struggle with their education because they don’t have access to good nutrition.”

It was just last week that a food bank in Dallas, Texas, handed out, in one day, the “largest-ever” food distribution.

Thousands of cars lined up to collect food in Dallas, Texas, over the weekend, stretching as far as the eye can see. pic.twitter.com/xLFGOcBkPK

Nationwide, internet searches for “drive-thru food bank near me” is erupting.

And the problem we see here is that many of the key provisions in the CARES Act are set to expire on Dec. 31 – this could be catastrophic for millions of unemployed Americans and risk derailing the economic recovery.

“We just hope that Congress acts quickly, the stimulus package needs to support families to put food on their table,” Cooper said.

And if elevated demand for food banks continues to persist, “meal shortage” could be seen within the next 12 months.

The new normal for millions of America’s working poor appears awfully similar to the 1930s.

Maybe each future stimulus check should include a one-year subscription to Blue Apron or HelloFresh?