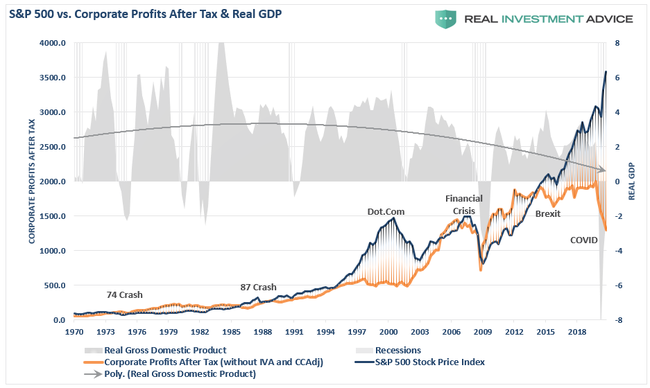 We have recently written a couple of posts about the “exuberance” that has invaded the market since the election. Such is often seen near short- to intermediate-term peaks in markets as investors go “all-in” without a net.

It was on December 5th, 1996, during a televised speech, that Fed Chairman Alan Greenspan stated:

“Clearly, sustained low inflation implies less uncertainty about the future, and lower risk premiums imply higher prices of stocks and other earning assets. We can see that in the inverse relationship exhibited by price/earnings ratios and the rate of inflation in the past. But how do we know when irrational exuberance has unduly escalated asset values, which then become subject to unexpected and prolonged contractions as they have in Japan over the past decade?”

It is an interesting point that the U.S. has sustained low rates of inflation combined with monetary and fiscal stimulus, which have lowered risk premiums, leading to an inflation of asset prices.

Over the last two weeks, we have noted the more “exuberant levels” of sentiment from investors since the election. As stated in “Bulls Go Ballistic:”

“Our composite ‘fear/greed’ indicator, which primarily comprises investor positioning, shows much of the same as ‘bullish sentiment’ pushes back to extremes.”

Importantly, investors are once again positioning themselves into equity “risk” at a rather alarming rate, with confidence surging higher. The 4-panel chart below shows investors have piled into equity funds, have a high level of confidence about the future, and complete evaporation of “short-interest” in the market. (Charts courtesy of The DailyShot)

Previously, we saw this type of surge in December of 2017, followed by a near 20% decline just two months later. We saw it again in February of this year.

Importantly, this is just the “fuel” necessary for a more critical correction in the market. As long as “no one strikes a match,” investors have little to be concerned about.

The Spark That Lights The Fuse

However, there are plenty of catalysts currently, which could “light the fuse.” My colleague Doug Kass laid out a list of potential candidates:

In reality, we have no idea what the catalyst will be. No one expected a “pandemic” in March, but here we are. The point is that with markets extremely overbought, extended, and deviated from long-term means, with overly confident investors, the risk of a reversion has grown.

In the “heat of the moment,” it is easy to get swept up into narratives as the “Fear Of Missing Out” overtakes our logical thought processes. As such, here are the 7-impossible trading rules to follow:

It seems like a simple thing to do, but the average investor sells their winners and keeps their losers, hoping they will eventually return to even.

3) This Time Is Never Different:

As much as our emotions and psychology always want to hope for the best – this time is never different. History may not repeat exactly, but it generally rhymes.

There is never a rush to invest. There is also NOTHING WRONG with sitting on cash until a real opportunity comes along. Being patient is an excellent way to keep yourself out of trouble.

5) Turn Off The Television:

The only thing you achieve by watching the television from one minute to the next is increasing your blood pressure.

6) Risk Is Not Equal To Your Return:

Risk only relates to the loss of capital incurred when an investment goes wrong. Invest conservatively and grow your money over time with the least amount of risk possible.

These are the rules. They are simple but impossible to follow for most. However, if you can incorporate them, you will succeed in your investment goals in the long run. In the end, it is crucially important to understand that markets run in full cycles (up and down).

While the bullish cycle lasts twice as long as the bearish cycle, investors’ damage comes not from lagging markets as they rise but in capturing the decline.

“In the end, it does not matter IF you are ‘bullish’ or ‘bearish.’  The reality is that both ‘bulls’ and ‘bears’ are owned by the ‘broken clock’ syndrome during the full-market cycle. However, what is grossly important in achieving long-term investment success is not necessarily being ‘right’ during the first half of the cycle, but by not being ‘wrong’ during the second half.”

The markets are indeed currently exceedingly exuberant on many fronts. With margin debt back near peaks, stock prices at all-time highs, and “junk bond yields” near record lows, the bullish media continues to suggest there is no reason for concern.

Of course, such should not be a surprise. At market peaks – “everyone’s in the pool.”

“The investor’s chief problem – and even his worst enemy – is likely to be himself.” – Benjamin Graham