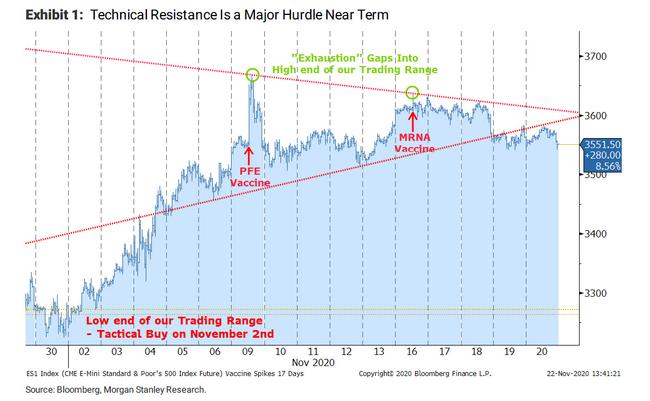 
Yesterday, when looking at the Morgan Stanley Sunday Start brief which recaps the bank’s key points, we said that “Wall Street’s most accurate analyst” – that would be the bank’s chief US equity strategist Michael Wilson – is bullish over the next 12 months seeing a 10% increase in the broader market, yet bearish into year end, expecting another corrective “drawdown” in the S&P500.

He wasn’t the only one: in a follow up note published this morning, Wilson says that the most common question he heard while marketing the bank’s optimistic, almost euphoria 2021 outlook was that clients “see 2021 upside, but are worried about the next few weeks.”

Wilson then elaborates that he is “not the only ones who are bulls into next year but a bit less comfortable with risk near term. More than a few people were surprised and worried about the inability of the market to break through 3600 on a deluge of good news from vaccine efficacy and lower election related overhangs.“

First, this is what the strategist heard on the positive side:

While on the bearish side, the following concerns emerged:

Addressing the concerns of these two camps, Wilson says that he sees merit in both sides and “it is hard to make a conviction call purely around short term flows.”

… and yet he also thinks that “dips are likely bought with a fiscal and Fed put still active and a path to recovery in 2021 now fairly clear.” Which is why his advice is that “if we get a pullback, use it to lean into any higher cycliality that may be oversold.”

Separately, he also notes that on Thursday night, we were hit with a new and unexpected risk – The US Treasury is requesting the Fed return unused funds to support credit markets provided by CARES 1. While the Fed could simply increase QE to offset some of this concern, credit markets may still trade poorly. Naturally, any thing perceived as “tightening” is undesirable at this time of the year when banks are winding down their normal activities, according to the MS strategist. Combine this dynamic with what is expected to be a heavy issuance calendar and “we may be facing a mini 2018 scenario in the short term.”

Wilson’s bottom line is that “both fiscal and now monetary policy have become reactive rather than proactive. For markets, that becomes the itch that needs to be scratched–i.e. market pressure is necessary and likely to get Congress and/or the Fed to act.“

Stated even more simply, stocks can drift higher, but to shoot up and break the resistance level, the market will first need to slide to provoke the “appropriate” response either from the Treasury or the Fed.