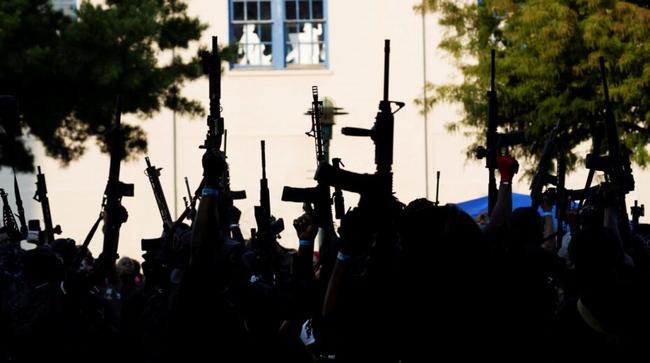 
Authored by Joaquin Flores via The Strategic Culture Foundation,

In The Dystopic Great Reset and the Fight Back: Population Reduction and Hope for the Children of Men , our Part I, we developed on our previous essays on planned obsolescence and the problems of the old paradigm as we enter the 4th Industrial Revolution. We looked at how several science fiction works like ‘The Virus’ and ‘Children of Men’ in culture actually predicted and lent to us an understanding the new reified nightmare being built around us. Finally, we looked at Althusser’s ‘ISA’, Ideological State Apparatus and how this was developed towards a politically correct elite culture which opened the door to the so-called ‘new normal’, where slavery and self-harm are virtue signals.

In our previous essay ‘Capitalism After Corona Lockdown: Having the Power to Walk Away’, we also then posed the question of the social contract itself.

Because the vast majority of us today are born into civilization, we don’t always think about its origins in terms of the agency of individuals who joined or formed the first civilizations. We tend to be taught through our institutions that it was something in between voluntary and natural, and the great 19th century nationalist romanticism promoted a view of self-determination of peoples, a view that would later be taken up by nationalist and leftist movements around the world in the 20th century – later enshrined in the UN.

But much of the story of the first state-building civilizations, understanding that people are a resource when organized and put to work, is that some balance between slavery and half-freedom rests at its foundation.

The mass production of books and guns, which came about within the same historical period, entirely upended the old foundation of class society. The mass production of guns and books may have, at a certain point, been seen as powerful reinforcements for the status quo. Larger armies could be effectively armed at lower cost. The Ideological State Apparatus, as we can infer from Althusser, could be disseminated and internalized more effectively. But as with technology, came its dual-use features. The very technologies developed with an eye at perfecting the control mechanisms within the status quo of oligarchic orders, in keeping up with the technologies that other competing power networks (countries, kingdoms, nations, etc.), can be turned on its head if these technologies were democratized and fell into the hands of the broadest possible numbers of people. Such was the process both in the American Revolution, and also for instance in the Vietnamese resistance to Japanese, French, and American colonialism in the last century.

For the first time in many centuries, knowledge and brute force were no longer an insurmountable near-monopoly held by the state or those it could compromise. The gun – the great equalizer of men, and the book – the great liberator of minds.

Since that epoch of great emancipation and promise, technology has continued with this contradictory path of dual-use. However, the balance of power and the natures of technologies hitherto developed has shifted tremendously, favoring the status quo and disempowering the broad masses. This lamentable condition, however, is upended by the applied technologies which the real 4th Industrial Revolution (not the World Economic Forum’s model) brings into being.

In the last epoch of the 20th century, we had begun a dangerous trajectory to a blind-sighted overspecialization (compartmentalization/fachidiotizmus) which are the hallmarks of technocracy, and away from the liberatory epoch of centuries past which gave rise to constitutional republics.

In the past, before the old liberatory epoch, just as a military class was reliant on exclusive access to armaments, today is characterized by a combination of pharmaceutical and social programming through media which are powers out of the reach of the people. This rise and perfection of what Heidegger would define and what Marcuse would characterize as a permanently stable techno-industrial bureaucratic mode of society, characterizes today’s world of social-media influencing, anti-depressants, mass psychological operations such as virtual or holographic pandemics (HIV, Covid-19, etc.), and the surveillance state.

This part is most important in establishing that for the foreseeable future, escaping the 4th Industrial Revolution is an impossibility. At the same time, the dual-use nature of the technologies still hold some liberatory potential, but the past methods of arriving at these has changed.

This means that the ideology of the ruling class is tremendously important. Unlike revolutionary republican and bolshevist conceptions of power and change which share an insurrectionist presumption premised in the liberatory age of guns and books (which made the ‘political soldier’ a possibility), we have increasingly entered a zenith point in social-control technologies wherein the likelihood of a controlled group winning a contest for power against the controlling group approaches zero, if we imagine this as a contest between armed groups wherein the military acts not in the interests of their extended families, but in the interests of those writing the checks.

Such limitations were already understood by those influenced by bolshevism, such as Antonio Gramsci in his discussion of hegemony in his Quaderni del Carcere. Cultural hegemony is a war of attrition over the entire ideological terrain, a component of what today we might call full-spectrum dominance. This parallels (and must have influenced) the later Althusserian conception of the Ideological State Apparatus (ISA).

The single-most revolutionary legal document to have arisen in the course of the last three-hundred years in the western tradition was the U.S. Constitution. At its foundation rests the assumption that man is born free, and enters into a social contract willingly, a view supported by a view of natural rights, natural law, and an equality of the soul endowed by the creator.

It is a social contract that man enters into every-day, and can exit any-day.

Before the rise of computers and robots performing much of the labor in society, societies grew in strength as they grew in people. With automation and roboticization, human beings become a surplus cost of no consequence to production provided that society itself is not anthropocentric.

The new normal being proposed, is one with no freedom of thought, let alone expression. It is one with social credit, tagging people as if they were animals on a wildlife reserve, and the total regimentation of every-day life. The contours of what techno-industrial civilization can lead to, of what scientific tyranny looks like, is not only visible to us now, but has been creeping into our lives for the past century.

The response to this in the U.S. has been an increasing support for Trump and the phenomenon that can really be described as ‘Trumpism’, which despite the media hologram of a Biden victory will most probably result in a second Trump administration. Trumpism has become synonymous with Constitutionalism, despite the revenge-fantasy language and tropes employed by a disconcerting segment of its base. In England, we have seen a parallel movement of the post-left, and a rise in ‘common law’ activism and an activist education campaign surrounding the meaning of the Magna Carta. For these parallel reasons, we had also previously characterized the Trump phenomenon as the child of a frustrated Occupy Wall Street movement after its affair with the Tea Party, but back in numbers and strength by a dispossessed working class long ago betrayed by organized labor, the DNC, and imbalanced trade deals with China.

But while these responses (with their defects and limitations) are a healthy sign, they do not yet have the depth to articulate a countering vision for society which also takes into account the state of technology as it exists today. That is why we have not seen a very thorough public discussion on the reality of technology, and the state of matters which are real and present.

Instead, we see from the conservative reaction to the 4IR – a reaction which raises all of the correct concerns and levies all of the correct criticisms against the banker’s version of it. This historically parallels the Luddites, who saw at the start of the 19th century that mass industry was replacing the work of the skilled trades and craftsmen with machines.

Their solution, to destroy the machines, failed primarily because machines produce more in volume than men. Even if they had won the political battle, it would have only been a matter of time before a competing society fully utilizing industry would over-take theirs. And perhaps this here tells the entire story of the conquest over nomadic and agriculturalist societies at the hands of the state-building, techno-industrial societies even thousands of years ago.

And so we arrive at the stark truth – there is no running or hiding from the future.

It is the task of free citizens to take a hold of the emerging new technologies into their own hands, for their own purposes: to live in society that acts towards human freedom and dignity of the soul. A world where our small children can grow up in a world without unnecessary humility or fear. A world where there is promise and hope, a promise truly justified by a real-existing society around them based upon what is true, what is beautiful, and what is good.