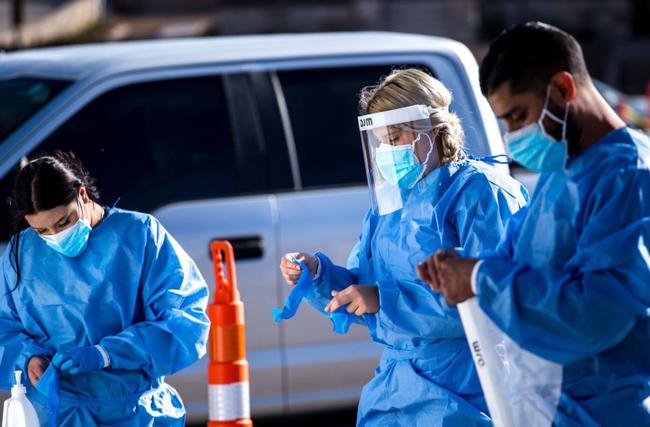 Now that Pfizer has officially filed for its emergency-use approval from the FDA, markets will be on tenterhooks until the approval is either handed down, or blocked for some ‘unforeseeable’ reason.

In the meantime, markets’ attention has shifted back toward the numbers as new cases swell and 1 in 5 hospitals around the country are in danger of facing staff shortages.

The US reported 1,870 fatalities on Friday, in a week in which the death rate increased pretty rapidly.

Hospitalizations in the US have reached a new record, with the midwestern prarie states seeing the highest rates of hospitalizations.

Across Europe, outbreaks have finally started to slow as new lockdown measures show their impact, though deaths and hospitalizations remain elevated.

Spain’s campaign to vaccinate its population is slated to begin in January and will be voluntary, according to local media reports, citing Health Minister Salvador Illa.

Spain expects to vaccinate about half its people by May, Illa said. The government plans to reveal further details of its vaccination strategy later this month.

In Poland, a brief series of closures is coming to an end, as shopping malls will reopen while keeping restaurants, movie theaters and schools closed as Prime Minister Mateusz Morawiecki asks the population for ‘patience’ until a vaccine arrives.

Over in Geneva, the WHO’s Special Envoy criticized the initial European response from the spring as “incomplete”, complaining that Europe failed to learn from Asian states like South Korea, which have successfully managed the virus since the beginning of the pandemic.

As European countries started to report Saturday’s numbers, Germany’s RKI said the country added nearly 23,000 new cases on Saturday, lifting its total north of 900,000, and putting it on track to become the next European country to top 1 million cases.

Here’s some more COVID-19 news from overnight and Saturday morning:

Hungary suffers a record 121 deaths from the virus on Saturday though the number of hospitalized patients and new infections continued to level off (Source: Bloomberg).

Russia sees record 467 deaths from the virus over the past 24 hours bringing the “official” death toll to 35,778 (Source: Bloomberg).

CanSino said surging COVID cases around the world will allow it to quickly reach the infection thresholds to analyze the efficacy of its single-shot vaccine (Source: Bloomberg).