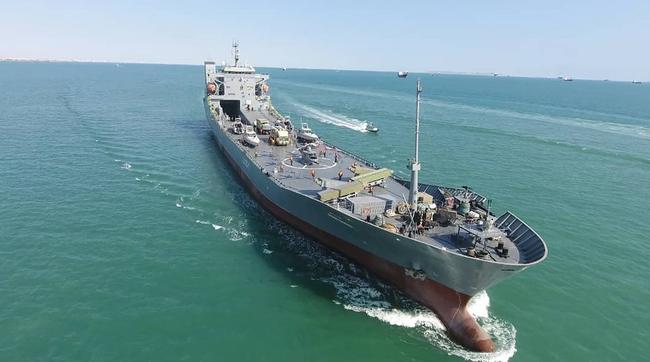 
It’s not quite an aircraft carrier though the AP has awkwardly dubbed it an ‘aircraft-carrying ship’ but it’s not a conventional warship either.

Named the Shahid Roudaki after a ‘martyred’ IRGC Navy commander, state media described it as an “oceangoing warship capable of carrying aircraft” and is the latest in a rollout of major weapons systems built inside Iran while the country is under biting US-led sanctions.

The Drive described it as a new “unorthodox” warship in Iran’s arsenal that will engage in long-range operations:

The various weapons and other systems that are seen on the deck in pictures from the ceremony at least visually reflects the warship’s purported mission spectrum, as a multipurpose vessel for long-range operations. From bow to stern, the weapons visible on deck comprise eight anti-ship cruise missiles in four twin container launchers, six Ababil-2 unmanned aerial vehicles (UAVs), a single Bell 412 helicopter, four speedboats, and a 3rd Khordad surface-to-air missile system on a road-mobile transport-erector-launcher plus what appears to be an associated command vehicle. Iranian media reports that the vessel is also equipped with a three-dimensional phased-array radar, plus “advanced communication systems for electronic warfare.”

New “multirole” vessel was adopted in service of the of IRGC Navy. Looks like there the idea is that it’s the floating platform for various weapons, reconnaissance assets, etc., depending on the need. On photos there on deck – 3rd Khordad SAM, GhadirGhader ASM, Ababil-2 UAV etc pic.twitter.com/FMvbfCbZiN

It measures 150 meters long at a displacement of 4,000 tons, and according to the IRGC is currently “ready to carry out missions”.

According to statements cited in the Associated Press, it shows Iran is preparing to beef up its presence in in Indian Ocean, where the US and its global allies currently have dominance:

“Presence and assignments in the Indian Ocean is our right,” Tangsiri said.

The ship appears to be an answer to U.S. Navy patrols in the region by its Bahrain-based 5th Fleet. U.S. aircraft carriers routinely travel through Mideast waters. Iran sees those missions, as well as Israel’s expanding presence in the region, as a threat.

The new ship does not specifically belong to the Iranian Navy but to the IRGC Navy, though the two often coordinate action and operate side-by-side.

It’s also believed the ship could enable more rapid IRGC deployment deeper in Persian Gulf waters, given it carries the type of fast boats typically used by the elite force anytime it intercepts or encircles US ships, as has happened in the recent past.

While Iran possesses small submarines and domestic-made mid-sized battleships, it has nothing even close to a large aircraft carrier such as is possessed by major powers like the US, China, Britain, and Russia.