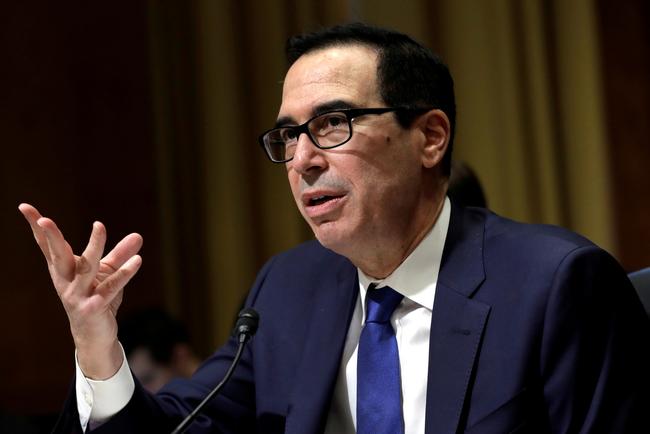 
After the mainstream press accused the Trump Administration of trying to “sabotage” the Biden Administration by closing out a handful of Fed lending programs that were seeded with money from the Treasury earlier this year, Secretary Mnuchin appeared on CNBC Friday morning for a lengthy phone interview with Jim Cramer.

The secretary defended the decision as “a very simple thing” and pointed out the irony that Democrats had initially been skeptical of “giving me $500 million to do with whatever I want”. The program has been “a great success story”, he said. Now it’s time for the money to come back, as Congress intended, he said.

“This has been an incredible success. Let’s not focus on a couple of facilities that were hardly used,” Mnuchin insisted. He also claimed that markets “should be very comfortable” with the amount of ammo the Fed has in reserve.

“Markets should be very comfortable that we have plenty of capacity left,” the Treasury secretary said.

“This is not a political issue,” he added

When pressed by Cramer & Co. about whether his decision to recall the funds was tantamount to shooting Jerome Powell in the back, Mnuchin insisted that he was simply following the process set out in the law, and that the money from these Fed lending programs could be put to better use by making loans to small businesses.

“The intent was this part of it expires in December, let’s go use this money in parts of the economy that need it. We don’t need this money to buy corporate bonds. We need this money to help small businesses that have been hurt, through no fault of their own.”

“The medical emergency may not be over but the financial conditions are in great shape…corporate bonds have come in…mortgages have come in…the stock market has rebounded. I’m hoping that since we’ve been such an effective steward of these tools…that Congress” won’t hesitate to authorize similar programs in the future.

While urging Democrats to come together with the GOP like they did in the spring to pass another round of stimulus measures, Mnuchin revealed that he would meet with White House Chief of Staff Mark Meadows and Senate leader Mitch McConnell. When asked about reaching out to the Dems, Mnuchin said he planned to reach out to Democratic Congressional leaders.

When the interviewer pointed out that the next few weeks could be “really ugly,” Mnuchin replied that the administration had shifted its focus from the economy to vaccines, which he said should become available to the first patients in a matter of weeks.

When it comes to negotiations with the Democrats on another stimulus package, the secretary said he would be “redoubling our efforts” to strike a deal, unleashing more optimistic headlines in another effort to pump stocks.

“I had hoped now that we’re past the election that the Democrats will work with us…during the CARES act we had incredible bipartisan support…we’ll be redoubling our efforts to try and get something done.”

When Jim Cramer quoted the NYT which accused Mnuchin of trying to sabotage the upcoming Biden administration, Mnuchin insisted that “what we’re trying to do is follow the law as we’re supposed to…[the program] has been a great success…let’s get it done.”

Asked about his willingness to work with his possible successor, Mnuchin said he would be happy to work with whoever once the certification process related to deciding the official President-Elect is finished.

“There’s a process to certify, and once this is certified of course we will work with whoever we need to work with,” Mnuchin insisted. Asked whether he would be “happy” if former Fed chairwoman Janet Yellen is picked as his successor, Mnuchin demurred, saying it wouldn’t be right for him to comment on the issue…but insisted that he would work with whoever is picked, after the results are made official.

Looking ahead, White House Press Secretary Kayleigh McEnany will hold her first press briefing since the election on Friday at noon. Meanwhile, the torrent of critical op-eds continued, with CNBC publishing a piece of commentary accusing Mnuchin of “removing the life boats from the Titanic”.

Mnuchin’s Fed move is like stripping Titanic of its lifeboats, economist says https://t.co/C7FC79hUoQ

Let’s hope America’s zombie companies have learned how to swim after all those years treading water.