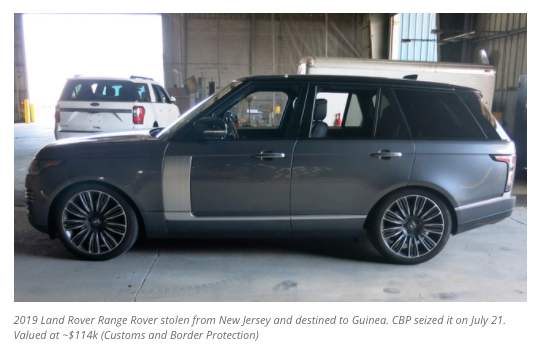 
Many of the container ships departing from the Port of Baltimore sail to West African countries. Organized crime gangs have found this out long ago, using the port as a convenient place to load their stolen vehicles, bound for places like Liberia and Nigeria.

Fox45 News says the Baltimore Field Office “ranks second in the number of vehicles intercepted during that time … Only the New York field office recovered more.”

The 157 vehicles represent a total value of $4.8 million. Fox45 News provides more details about where the stolen cars came from and where they were headed.

Most of the vehicles were being shipped to countries in Africa, including Benin, The Gambia, Ghana, Guinea, Ivory Coast, Liberia, Nigeria, Senegal, Sierra Leone, and Togo.

The most expensive recovered stolen vehicle was a 2019 Land Rover Range Rover, valued at $114,175; it was destined for Guinea.

The oldest vehicles were a 1999 Nissan Frontier destined to Guatemala and a 1999 Lexis RX300 destined to Nigeria. -Fox45 News

Last year, the Baltimore Field Office reported a “new record” in the number of stolen vehicles being shipped from surrounding ports.

As American cities become more violent, amid the socio-economic implosion, expect the stolen vehicle trade from US East Coast to Africa to continue to surge.