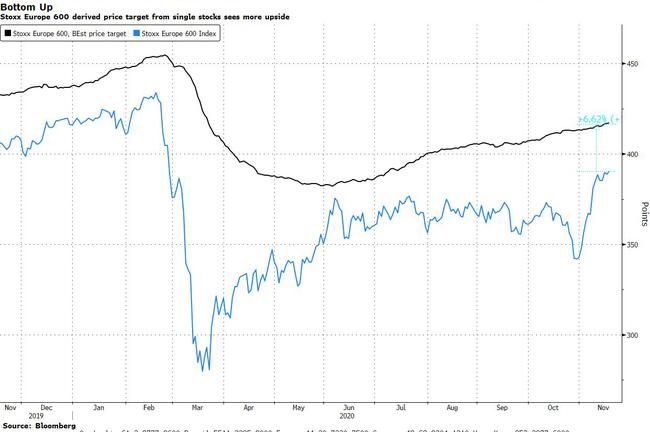 After this month’s vaccine-induced rally that caught most investors by surprise, strategists are turning to 2021 for further gains in European stock markets, given that benchmark indexes will most likely finish this year in the red. On average, they are far from bullish.

The Stoxx Europe 600 Index will rise to 399 points next year, implying just above 2% gain from Wednesday’s close, based on the average forecast from nine strategists polled by Bloomberg. They see a 2021 year-end level of 3,582 for the euro-area gauge Euro Stoxx 50, leaving less than 3% upside.

“We already saw some kind of a year-end rally since the end of October, mainly based on vaccine hopes,” said Unicredit SpA strategist Christian Stocker, who sees the Stoxx 600 making little headway for the rest of 2020. Next year, effective treatments for Covid-19 should improve market sentiment further, with cyclical stocks likely to be among the best performers, the strategist said.

European stocks benefited from a series of catalysts in November that propelled the Stoxx 600 to 390 points, a 14% surge. The outcome of the U.S. election was perceived as a positive event for Europe, with a Joe Biden presidency expected to ease international tensions, while successful clinical trials for two coronavirus vaccines brought forward the prospect of a return to normalcy. After the November rally, the Stoxx 600 is still down about 6% this year after a 40% surge from its March 18 low.

“In 2021, the market will focus on the path of the recovery and will more discriminate between sectors,” said Roland Kaloyan, Societe Generale SA’s head of European equity strategy. “With very accommodative fiscal and monetary policy and, hopefully, vaccines at work, European markets have still room to continue to recover next year.”

Investors’ buoyancy is still leaving some strategists skeptical about next year, represented by the wide range of forecasts in the survey, with TFS Derivatives Ltd predicting the Stoxx 600 will fall more than 7%, while Makor Capital Markets SA expects a 22% rise.

Overall, the global equity market is now close to “full bull,” Bank of America Corp. strategists said in reporting the results from their November fund manager survey. Investor optimism toward equities is the highest since January 2018, while cash allocations have dropped below pre-Covid level at 4.1% and are close to triggering a “sell signal” at 4%, they wrote. Over the past seven months, cash levels have fallen 1.8 percentage points, the fastest drop ever, according to BofA.

BofA strategists lowered their stance on European equities from positive to neutral last week, and cut their Stoxx 600 year-end target for 2020 by 8.8% from last month, the largest change in the Bloomberg survey. They remain overweight the cyclical laggards, such as value versus growth stocks, banks, insurance, energy and airlines, which have only recently started to price in a recovery, BofA strategist Milla Savova said.

“With the market already fairly advanced in pricing the macro recovery we expect over the coming months, our PMI assumptions imply over 10% near-term downside for the Stoxx 600, followed by less than 5% upside from current levels to 400 by April,” she said.

Overall, the positive vaccine newsflow didn’t trigger any immediate wave of optimism among strategists. They increased their 2020 year-end price target for the Stoxx Europe 600 by only 2.7% on average, to 380, this month compared with October.