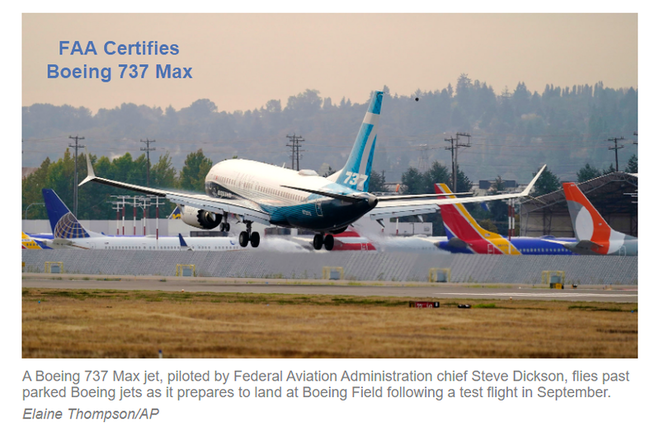 The FAA certified the Boeing 737 Max on Wednesday. Here’s the inside scoop on exactly what caused the crashes.

The Boeing 737 Max has been grounded since March of 2019 after two aircraft crashes killing everyone on board.

After 20 months on the tarmac following two fatal crashes, Boeing’s troubled 737 Max airliner has been given the green light to resume passenger flights, the Federal Aviation Administration announced Wednesday.

The plane’s return to the skies will not be immediate, however. The FAA is requiring a series of design changes laid out in a 115-page directive. It also put forward training requirements for pilots and maintenance requirements for airlines.

“This airplane has undergone an unprecedented level of scrutiny by the FAA,” Dickson said. “We have not left anything to chance here.”

After the FAA announcement, the Air Line Pilots Association released a statement saying it “believes that the engineering fixes to the flight-critical aircraft systems are sound and will be an effective component that leads to the safe return to service of the 737 MAX.”

Boeing was aware of issues but did not disclose them to pilots or the FAA.

Investigators found a “culture of concealment” as well as “grossly insufficient oversight by the FAA.”

A Few Lines of Code

Fehrm says “The 737 is a Safe Aircraft” and this “chain of events will not happen again on an updated 737 MAX“.

Much of the discussion in from a pilot’s perspective that is hard to follow but the key details are easy to understand even if you do not understand the terminology.

I describe the above in sufficient detail so we can understand how little in MCAS needed change to take it from a hazardous function to one that would have caused no trouble if wrongly triggered.

In addition to this change, Boeing has made additional changes to increase safety further.

A single sensor no longer triggers MCAS. Both AoA sensors on the 737 MAX have to agree on the aircraft AoA, or Speed Trim including MCAS is deactivated (neither is needed to fly the plane. They are augmentation functions, i.e., good to have but not necessary).

On top of the dual-sensor activation of MCAS, its global authority, no matter what, is limited. The Pilot always has enough pitch control to fly the aircraft.

To make MCAS safe, we only needed the correct reset criteria. But as the investigations dug deeper into how Boeing and FAA could miss how dangerous the original MCAS was, the requirements for changes grew. All eventualities, even remote ones, should be covered.

My Boeing contact who sent me the Leeham article notes Bjorn Fehrm is a former fighter test pilot and an aero engineer based in France.

Bjorn has said he would pilot the MAX as well as fly in it as a passenger.

Most Expensive Lines of Code in History

Had a few lines of code been properly placed, there would not have been two crashes or 20 months of grounding even though other safety features were needed.

In retrospect, it is not really the lines of code that were the problem.

It was the “culture of concealment” coupled with “grossly insufficient oversight by the FAA.”