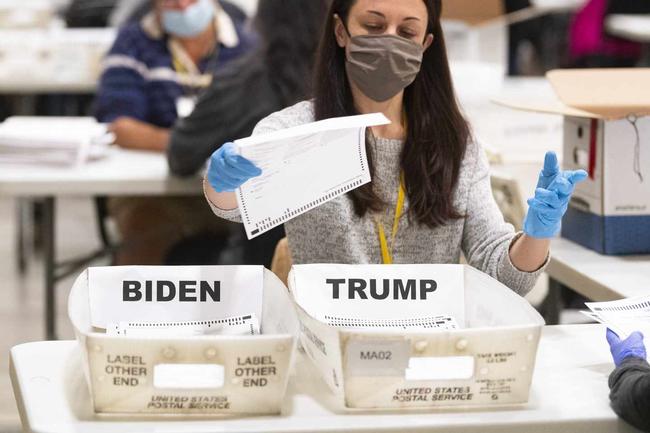 
Authored by J.Peder Zane via RealClearPolitics.com,

Imagine if Joe Biden had enjoyed a healthy lead on election night only to see it evaporate as the numbers dripped in from Republican strongholds.

Does anyone believe the mainstream media would have rushed to anoint Donald Trump the winner? Would the New York Times, Washington Post, NPR and other outlets have cast the inevitable Democrat demands for ballot reviews and recounts as a constitutional crisis or would they have run wall-to-wall coverage about the inherent problems associated with mail-in ballots?

We don’t have to imagine the answer – just recall 2016 when the same liberal news organizations that are damning Trump as a tyrant and suggesting he might be planning a coup cheered and facilitated Democrat efforts to delegitimize Trump’s victory by claiming he was a crooked businessman who had colluded with Vladimir Putin to steal the election.

After early efforts failed to convince electors to defy the will of their states and cast their ballots for Hillary Clinton, talk turned to impeachment before Trump was even sworn in. On the morning of his inauguration – which was boycotted by several dozen Democrat members of Congress because, as Rep. Jerrold Nadler said, he was not “legally elected” – a Washington Post article reported, “The campaign to impeach President Trump has begun.”

Democrats and their media allies fulfilled that promise, spending the next three years using salacious smears funded by the Clinton campaign to claim Trump was Putin’s puppet. When Special Counsel Robert Mueller dismissed that conspiracy theory in March 2019, Democrats impeached Trump on other grounds that did not include high crimes or misdemeanors. At a May 2019 event, Biden agreed with a woman who said Trump was “an illegitimate president.” A month later, former President Jimmy Carter said the same.

Nothing in our history has done more to destroy norms and undercut the rule of law. This history does not bolster Trump’s claims that massive voter irregularities caused his 2020 defeat – though we owe it to our country to review the results from this highly unusual election. It does suggest that one reason millions of Americans are skeptical about Biden’s victory is the insistence of a highly partisan media that he won fair and square – no questions asked.

Presidents come and go, but the media is forever. The transformation of leading news outlets from liberal voices into propaganda arms of the left may be the most consequential legacy of the Trump era. It’s not surprising that the media so causally compares Trump to Hitler while branding Republicans as racists – these are now articles of faith among the leftists they support. This is apparently what they believe.

Gallup polls illustrate the partisan shift. During the Obama years about 55% of Democrats felt the “mass media” reported the news “fully, accurately, and fairly.” About 30% of Republicans agreed.

No doubt many Democrats tell themselves they are reality-based while Republicans have been brainwashed by Trump’s “fake news” lies. But that position is hard to defend given the Trump/Russia fiction they perpetrated, the ugly accusations they launched against Brett Kavanaugh during his Supreme Court confirmation hearings, and the contempt with which they view those who disagree with them.

Free nations need an honest press. We no longer have one. Heaven help us.