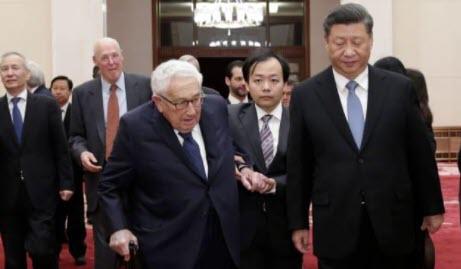 
Many have feared US tensions with China are on such an edge on multiple fronts, also through allies in the region, that war could easily erupt based on what in normal times might be seen as a small encounter or incident.

And now, Henry Kissinger has raised his warning levels during the opening session of the Bloomberg New Economy Forum, telling the incoming Biden administration should move quickly to restore lines of communication with China that frayed during the Trump years or risk a crisis that could escalate into military conflict.

When we previously heard from the former US secretary of state on the last couple of occasions, he was warning that a permanent conflict between Washington And Beijing would be unwinnable and lead to “catastrophic outcome”…

“It’s no longer possible to think that one side can dominate the other… it will be worse than the world wars that ruined European civilisation,” said Kissinger.

The 96-year-old noted that there is an important difference between previous times and now: “American endurance then was fortified by an ultimate national purpose. Now, in a divided country, efficient and farsighted government is necessary to overcome obstacles unprecedented in magnitude and global scope,”

“Sustaining the public trust is crucial to social solidarity, to the relation of societies with each other, and to international peace and stability,” he said.

This all fits with his new statements today, warning the Biden administration today that:

“Unless there is some basis for some cooperative action, the world will slide into a catastrophe comparable to World War I.”

The former US Secretary of State added that despite the two sides reaching a “phase one” trade deal at the start of the year, U.S.-China relations are at their lowest in decades as the virus outbreak that began in Wuhan has become a global killer:

“America and China are now drifting increasingly toward confrontation, and they’re conducting their diplomacy in a confrontational way.”

“The United States and China have never faced countries of a magnitude that is roughly equal with the other,” Kissinger added.

“This is the first experience. And we must avoid its turning into conflict, and hopefully lead to some cooperative endeavors.”

Rather notably however, after Hank Paulson’s calls for broad-based renewed talks with China, when reviewing some of Biden’s proposals for addressing China, Kissinger urged caution when asked about the idea of building a coalition of democracies to take on Beijing.

“I think democracies should cooperate wherever their convictions allow it or dictate it,” he added.

“I think a coalition aimed at a particular country is unwise, but a coalition to prevent dangers is necessary where the occasion requires.”

As Kissinger warned previously, we went on from the Battle of the Bulge into a world of growing prosperity and enhanced human dignity. Now, we live an epochal period. The historic challenge for leaders is to manage the crisis while building the future. Failure could set the world on fire.