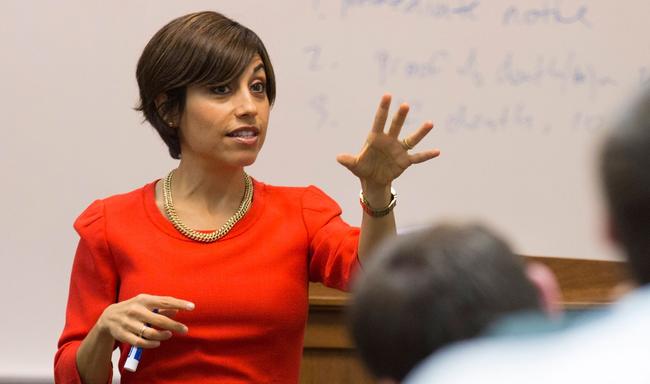 
Joe Biden has tapped UC Irvine Law professor Mehrsa Baradaran to help his potential administration “hit the ground running on Day One” as a member of his Treasury Department agency review team.

Baradaran, as noted by the Washington Free Beacon, “is an outspoken advocate of reparations for black Americans, both as a means of correcting “white supremacy” and closing the racial wealth gap.”

Notably, Biden and his running-mate Kamala Harrois (D-CA) ignored the topic of reparations throughout the 2020 election to the point where Baradaran called Harris out on it over Twitter, writing “Dear Kamala, Reparations or go home.”

In December 2019, she wrote during the Democratic primaries that “Biden just dodged that reparations question like a much nimbler and younger man.”

Biden just dodged that reparations question like a much nimbler and younger man.

More via the Washington Free Beacon (emphasis ours):

In her 2017 book The Color of Money: Black Banks and the Racial Wealth Gap, Baradaran argues that closing the racial wealth gap requires acknowledging past wrongs and providing compensation for damages. “A reparations program could take many forms from simple cash payments or baby bonds to more complex schemes such as subsidized college tuition, basic income, housing vouchers, or subsidized mortgage credit,” she writes. Baradaran’s book inspired Netflix to donate $100 million to organizations that “support Black communities.”

Before joining Biden’s transition team, Baradaran helped Sen. Bernie Sanders (I., Vt.), Sen. Elizabeth Warren (D., Mass.), and former South Bend mayor Pete Buttigieg on policy proposals to address the racial wealth gap. Biden, who left reparations out of his racial equity plan, said he would study the issue. “[Biden] believes that we should gather the data necessary to have an informed conversation about reparations, but he has not endorsed a specific bill,” a spokeswoman said during the campaign.

Harris has been similarly noncommittal. “When you are talking about the years and years and years of trauma that were experienced because of slavery, because of Jim Crow and because of all that we have seen in terms of institutional and legal discrimination and racism, this is very real and it needs to be studied,” she said during a CNN town hall in April 2019.

Reparations could carry an estimated $17 trillion price tag, according to a 2019 analysis from the House Judiciary Committee on the Constitution, Civil Rights and Civil Liberties.