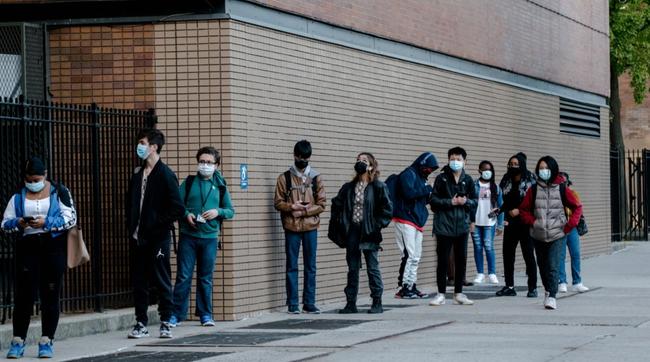 
The US exceeded 100k newly confirmed COVID-19 cases for the tenth straight day on Saturday. Although they came in below Friday’s record, new cases exceeded 160k on Saturday, leaving the 7-day average at a record high, while deaths exceeded 1,300, topping 1,000 for the fifth straight day.

One major development in the the US this weekend: All 50 states are officially back in expansionary territory after Vermont saw the virus’s rate of spread climb back above 1. Over the last 24 hours, 38 of 50 states reported more than 1,000 new cases, as the virus outbreak explodes, along with hospitalizations. Even deaths, which had remained surprisingly subdued as infection rates climbed in September and October, are starting to creep upward.

A CNN chyron announcing the news is going viral.

What a terrifying chyron. pic.twitter.com/UtNPWvJnRc

Testing continues to climb, but at a slower rate than the growth in cases.

Testing is increasing, though much slower than case growth. pic.twitter.com/poiE2vkY2r

Perhaps the biggest news in the US Sunday morning was NYC Mayor Bill de Blasio declaring that, contrary to his comments on Friday, when he warned parents to be ready for schools to close as soon as Monday, schools instead will remain open.

Today’s indicators are similar to yesterday:

Thankfully, schools will remain open on Monday, but we have to keep fighting back with everything we’ve got.

However, he continued to urge New Yorkers not to travel for the holidays.

I know asking New Yorkers not to travel for the holidays is painful. It’s painful for me, too. But it’s a sacrifice we have to make — and I promise you next year will be better. pic.twitter.com/MewhARVeKQ

In Europe, Austria just revealed that it’s taking a cue from nearby Slovakia’s mandatory testing programs, one of the most ambitious COVID-19 eradication methods in Europe; Austrian Chancellor Sebastian Kurz announced Sunday that the country would move ahead with plans to test its entire population, which is roughly double the size of Slovakia’s.

A few notable highlights: North Dakota and South Dakota are seeing rates of spread similar to Michigan back in April.

In North and South Dakota, COVID-19 deaths per million are similar to rates in Michigan back in April – and are likely to continue rising. pic.twitter.com/ouzy50Lgit

In Europe’s biggest economy, Germany,  Economy Minister Peter Altmaier warned that Germans will need to live with “considerable restrictions” against the spread of the virus for at least the next four to five months.

As far as the biggest western countries go, Europe generally continues to outpace the US.

Here’s some more COVID-19 news from Sunday morning and overnight:

Margrethe Vestager, the European Union’s antitrust commissioner, said she’s been told that a “working relation” tested positive for coronavirus, according to a post on her Twitter account. Vestager has herself been tested, is in quarantine and will work from home in the coming week, she said in the post (Source: Bloomberg).

Malaysia recorded an 8.4% increase in new cases to 1,208. The capital city of Kuala Lumpur topped the list with 469 infections, overtaking the top post from Sabah state. There were three new deaths. Malaysia has been struggling to contain a new wave of cases that emerged in late September. The government has recently tightened movement controls in all almost the states in the country. New cases have topped 1,000 since Friday (Source: Bloomberg).

The head of the Serbian Orthodox Church, Patriarch Irinej, was exhibiting heart problems during treatment in a hospital in Belgrade. Irinej, 90, was hospitalized with a Covid-19 infection on Nov. 5. Irinej and one of his bishops tested positive for coronavirus after holding a service for another top cleric whose funeral in neighboring Montenegro drew large crowds despite health warnings (Source: Bloomberg).

Tokyo reported 352 new coronavirus cases on Saturday, topping the 300 mark for a fourth consecutive day, the first such streak since early August. Japan confirmed 1,704 new cases on Friday, topping the previous record high of 1,660 marked a day earlier, with health experts warning of a possible “third wave” of infections as the winter season approaches (Source: Nikkei).

Finally, NBC News has published a report warning that widely reported side-effects caused by the COVID-19 vaccine being developed by Pfizer could create unexpected problems for distribution. Like with the flu shot, the vaccine can cause muscle soreness, fatigue and other symptoms.