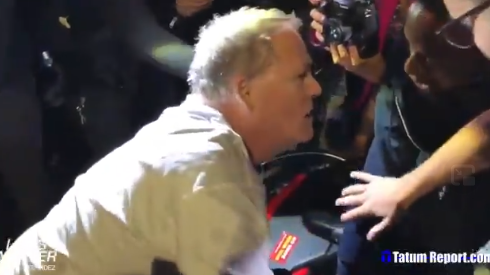 
Update (2130ET): As the evening has progressed, so has the violence – almost entirely committed by leftist thugs against conservatives.

We are not the same.

Antifa and BLM members attack people who are eating dinner near BLM Plaza. They threw projectiles and a large firework. pic.twitter.com/w96nbZaJ8F

Here is a pro Trump marcher taking a knife from an apprehended BLM female protester. pic.twitter.com/8NLwGy6uCC

What was that about unity?

Massive crowds of people converged at Freedom Plaza in Washington on Saturday, joining other rallies around the country to show support for President Donald Trump and ask for fairness in the election process.

As The Epoch Times’ Allen Zhong reports, the participants marched to the U.S. Supreme Court holding signs that read “Stop the Steal,” “Make America Fair Again,” and “Trump 2020.” Before the start of the march, the crowd heard speeches from prominent Trump supporters including Rep. Louie Gohmert (R-Texas) and My Pillow founder Mike Lindell. Several other prominent figures including Rep. Paul Gosar (R-Ariz.) and former Trump advisor Sebastian Gorka were also on the speaking list.

Participants chanted slogans calling to “stop the steal,” which is also the name of the grassroots movement organizing the event in part. Organizer Ali Alexander told The Epoch Times in a previous interview that the events are a grassroots effort by a coalition of about a hundred activists and influencers to show “support for President Trump and fair elections and transparent counting.”

Similar events, although smaller in scale, were organized in around 50 other states on the same day.

Everything was very peaceful (not just mostly peaceful) until the crowds started to disperse and groups of BLM and Antifa activists began to appear, agitating attendees, and eventually turning to violence… even against children.

As The Post Millennial reports, some footage is very disturbing and depicts a little girl being assaulted.

LIVE in DC: Posturing and heckling takes place on both sides of a barricade in front of SCOTUS. @mattmiller757 reporting for The Post Millennialpic.twitter.com/IbCTCvju1s

All out violence did not occur until people began dispersing. Some footage depicts a man physically assaulted, resulted in a head wound.

DC: A man was physically assaulted in front of Union Station

His face is bloodied from the physical assault pic.twitter.com/Dxz2BS1ytB

Other footage shows a young Trump supporter fleeing for safety as he is stalked by Antifa. He eventually sees police and yells for help.

DC: A young Trump Supporter flees for his safety as Antifa militants threaten him away from their march towards BLM Plaza pic.twitter.com/vcCSKyFvtK

The most disturbing piece of footage depicts a family being attacked by Antifa. A mother is seen attempting to flee the area with her small daughter. He daughter is eventually thrown to the ground in the middle of a fight.

Black Lives Matter militants are now assaulting Trump supporters at random in DC. Be safe out there. pic.twitter.com/RqZGZX4ZSV

Some footage shows people crying in fear as they are pursued by the militants.

You can hear see and hear the female Trump Supporter cry in fear pic.twitter.com/No1QDp4KLd

It remains unknown how many individuals have been arrested but some footage depicts the police arresting people.

Two men have been arrested by the DC police for assaulting Trump supporters at the march. pic.twitter.com/jlhxThGwyk

So – when will the media admit that the boarding up of stores/businesses/homes ahead of the election was not out of fear of a Biden victory, but a Trump win and the inevitable mostly-non-peaceful attacks and looting that would inevitably follow.

Norma had been vocal about her support for President Donald Trump before the election, and sees no reason to stop now. “I’m supporting Trump right up until the very end,” Scott said in her Trump shirt and buttons, carrying a flag.