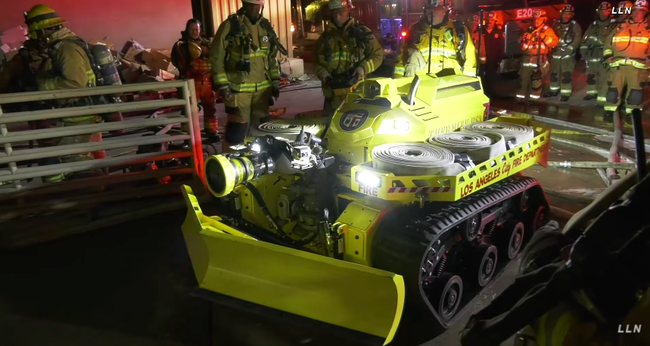 RS3, shaped like a mini-tank with a v-shaped plow capable of pushing debris – and a frontal nozzle can shoot or spray either water or foam at 2,500 gallons per minute – was deployed at a warehouse fire packed with wooden model ships.

“Because firefighters had difficulty getting access to the basement,” RS3 was deployed by LAFD, said ABC7 Eyewitness News.

A video of the blaze shows RS3 appearing on camera around the one minute mark. The robot, armed with the plow and water nozzle, makes its way down a service ramp to the building’s basement, where it begins to extinguish the fire.

LAFD appears to be leveraging technology to enhance firefighting operations, a move that is reducing risks to firefighters and saving lives.

However, when it comes to the impact of automation (robots, AI, etc.) on firefighter jobs, these robots, in the meantime, will assist LAFD, though, down the line, it will result in the need for fewer firefighters.