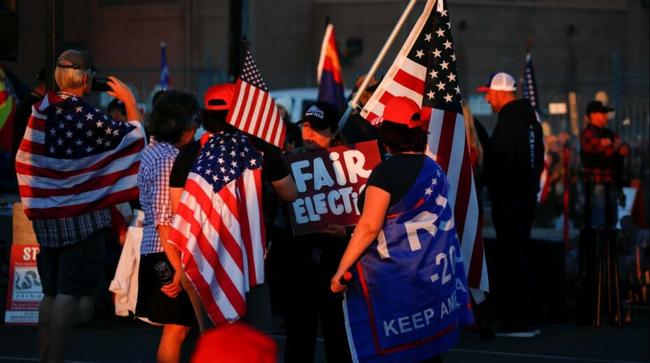 
Authored by Tim Kirby via The Strategic Culture Foundation,

Right now, the entire world sits in waiting for the final declaration of the victor in the 2020 U.S. Presidential race even if they have already officially congratulated Biden. This still technically ongoing electoral process has exposed many truths and confirmed a wide range of suspicions about what is actually going on inside American politics. How “the game is to be played” going further down the road will be determined by who wins or maybe better yet how they win. Let’s break down everything we should have learned from this very unusual voting year during this brief window of uncertainty.

The American Left is now crying out for “Healing and Unity” across the country which is an obvious middle school ploy to make any attempts by Trump to get fair final election results look pathetic and divisive. On the surface one would think that this is an offensive strategy from the dominant side to get the other to break, but calls for peace generally come from the one with the weaker hand.

If the Democrats were sure that Trump lost, then there would be no need to call for peace after years of demonizing anyone who doesn’t agree with them. This rhetorical change is not one of triumph, but of fear. When the first partially Black President of the United States came to power the Left boldly rode this wave of political inertia starting their transformation into hardcore Progressives and while showing zero concern for the losers and “unity”. For them this was a smug moment of victory, much like Trump’s 2016 victory was for the right. So why would they choose to become so much more friendly all of a sudden this time?

Image: After years of hateful rhetoric why call for healing and unity now?

It seems more likely than not that this guilt tactic is being used because Trump may actually have a case and be able to get the votes counted accurately, i.e. in his favour. Moral high ground attacks from the Dems are unlikely to work as Trump has been compared to Hitler since the start of his previous electoral campaign. Appeasement for the POTUS has thus far completely failed, why would it start working now?

A Color Revolution in America is possible and may have occurred

The Old Russian joke that a revolution could “never happen in America because there are no U.S. Embassies in Washington” has now become obsolete. The media, including even the supposedly conservative Fox News, has completely and totally given the election to Biden despite many irregularities. Not to mention, the fact that as these words are being typed – the election is not officially over.

Image: High journalistic standards in practice in the EU.

If there is one key element to a Color Revolution that must be in place for success it is control of the media. If every TV channel and news site says candidate X is the winner, then he has won regardless of votes and regardless of how many people still use said dinosaur media. They ultimately cast the big final ballot.

The rampant tampering and falsification witnessed (and often self filmed by the perpetrators) during the election looked like something you would expect to see in a “backwards third world hellhole” type of country. The manipulation was rampant, blatant and primitive.

This fact can and should be used by the nations at odds with America (Russia, China, Iran, Cuba, Syria, etc.) in perpetuity as proof that the U.S. never had, nor should have, some sort of democracy-based moral authority over anyone else. America’s own Color Revolution delegitimizes any attempts to spread regime change via media elsewhere across the globe.

The Dynamic between the Republicans and Democrats has changed forever.

Donald Trump has changed the Republican Party, from the party of Businessmen and a defensive Upper Middleclass with a sprinkling of Social Conservatism speaking almost exclusively to a White audience into a populist party that offers a Right Wing emotional vision to the multi-ethnic America that we live in today.

The shift in concept of the Republican Party is so severe that Trump’s influence has had the same or maybe even a greater effect that “The Southern Strategy” ever did. Around ten or fifteen years ago it looked like America would evolve into a one-party state due to demographics and the inability of Republicans to appeal to non-Whites. If polls can be trusted, at the very least Trump has doubled the amount of Black Americans who voted for him last time and was able to persuade ⅓ of Latinos to vote for him despite building “The Wall”. Looking back on the 2016 election it is easy to see these huge gains, in groups that the Democrats took for granted as “theirs”.

In contrast to Trump’s vision of a pro-Consitution, somewhat Libertarian populous party the Democrats have doubled down on hardcore Progressive positions. If the Dems used to represent the working man in a White vs. Blue collar America battle, they have now shifted over to being a Postmodernist circus of race, gender and sexual orientation baiting with a sprinkle of environmentalism via taxation as icing on the cake.

These are two radically different messages in direct opposition to each other, and the parties are no longer “two sides of the same coin”, being two slightly different takes on the Liberalism laid down by the Founding Fathers. This is probably why things have gotten so unusually ugly, American politics may have become truly “winner take all”.

Enemy Lists are Proof of Extremism

When Richard Nixon’s enemy list was discovered it shocked America. How could such an important politician try to crush those who disagreed with him? Those are the actions of a monsterous dictator, how horribly unamerican! Well the Overton Window has certainly shifted since the 1970’s and Alexandria Ocasio-Cortez’s call to create the same type of political repression of her enemies was met with mostly applause over Twitter.

Image: The Enlightenment is dead and we killed it.

Now a “Trump Accountability Project” has already sprung up based on her words to make sure that everyone who supported Trump will be somehow punished. From having their noses rubbed in it, to having their lives ruined by being doxed, harassed, etc.

This idea of creating a Black List of people to punish, is the line where passion for an ideology turns into a form of Extremism. This along with the intimidation tactics used by Antifa are proof that the Democratic Left now has demonstrably Extremist views.

The key issue with Extremists is that you cannot make any agreement with them as they see their opponents as subhuman and/or evil. Trump over the last 4 years has made the massive mistake of trying to “playball”. The problem is that one cannot do so with people who have fanatical views. Making concessions to those with Extremist views is basically just tightening the noose around your own neck. Trump, if he survives this needs to understand that this is political war not political games.

Image: The election results are “counted” by those with the money to broadcast the results. Trump needs to break the monopoly.

Trump & The Right need to invest in a Media Empire

The homogeneity of the American news media has become Orwellian. Trump and other like-minded billionaires need to put together a countervoice on their own dime. The Trump Presidency would be doing much better if a billion dollar news outlet was on his side fighting back. There are many media experts with the experience needed (including and especially the author of this piece) who could get this done quickly and effectively.

The Million MAGA March will surely turn violent and that violence will be exploited for political gains.

Image: The big march is coming, but who would honestly expect it to go peacefully?

Leaders that have survived Color Revolution attempts like Venezuela’s Maduro and Belarus’s Lukashenko have one thing in common – massive public support. At the very least a massive public showing for the Dear Orange Leader wouldn’t hurt but if Antifa were to show up to fight, the event could be exploited by the Right for all sorts of political action. Just because Trump’s views seem much more human and reasonable compared to SJWs does not make him a saint. This event will be manipulated to the utmost.

Congratulating Biden is proof of approval of or submission to Washington.

Some nations have already congratulated Biden, whereas America’s two “big dog” enemies, Russia and China, and many other disgruntled parties have not [ZH: China has since congratulated Biden]. This willingness to congratulate Biden, supporting the legitimacy of the elections as the Mainstream Media reported them is very telling to say the least.