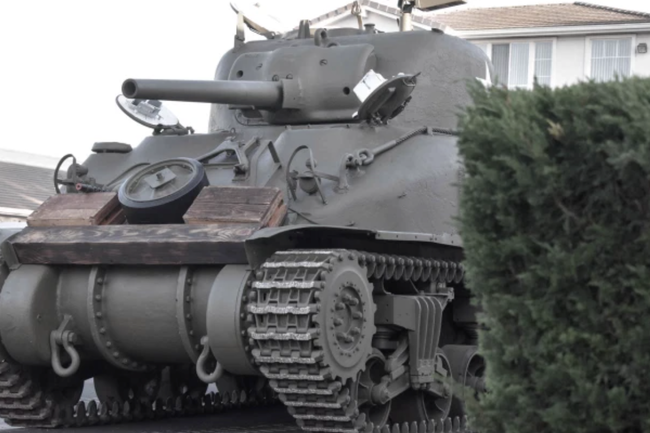 
When it comes to the virus pandemic in America, and the resulting socio-economic implosion, millions of folks have been panic buying food, guns, ammo, and gold.

By the day, violent crime is surging across major metros as depressionary unemployment has left more than ten million without jobs. Demand for armored vehicles indistinguishable from an ordinary Mercedes-Benz, Toyota, Range Rover, Cadillac, and or Lincoln have been increasing, but why stop there?

Up for auction this week on Bring A Trailer is a 1943 M4A1 Sherman tank, “one of fewer than 20 known-running M4A1s,” according to the listing.

On Wednesday morning, the tank had a bid of $300,000, with eight days left in the auction. An impressive 3,581 watchers and more than 125,000 people have viewed this online auction.

This is one of the most famous second world war tanks serving the Allied Forces; nearly 50,000 variations of the tank were built. The tank has been “demilitarized,” according to the listing.

A big question certainly going through your mind is if it’s legal to own a tank in the US?

According to DriveTanks.com, the answer is apparently “yes.”

“There are no US Federal restrictions to owning a tank with a demilitarized (disabled) main gun. You may operate it on private land without restrictions. You will also need to determine if there are state or local laws prohibiting tank ownership. If you can own a tractor, you can own a tank!”

Hiding in an undisclosed warehouse in Baltimore City, or at least somewhere in the Baltimore metro area, Under Armour founder Kevin Plank apparently owns a tank. As to why? Well, that’s an excellent question.

American CEOs are trading in their corporate jets for corporate tanks.