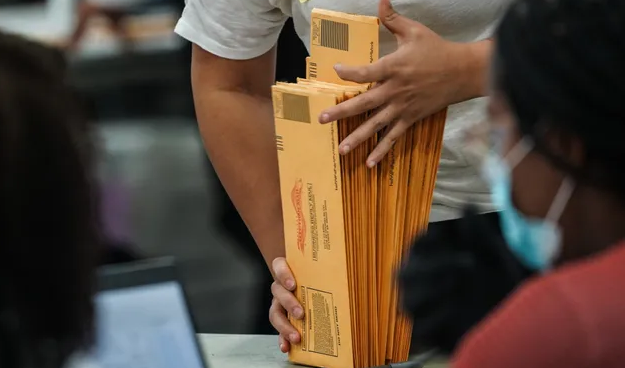 
The Trump campaign has requested an emergency injunction in a federal lawsuit aimed at preventing the State of Michigan from certifying the results of last week’s election until election officials can certify that only legally cast, on time, and legally observed ballots are included in the count. The campaign is alleging several types of fraud, misconduct, and invalidated ballots based on a number of reasons – including ‘malfunctioning’ vote counting machines made by Dominion Voting Systems.

The Tuesday night filing in the US District Court for the Western District of Michigan alleges, among other things, that officials prevented GOP challengers from observing the count, scanned “batches of the same ballots multiple times,” illegally accepted and pre-dated late ballots, including from unmonitored drop boxes, and that election workers illegally duplicated ballots,” according to a statement from the campaign. The lawsuit requeusts that the court toss all ballots not observed by a GOP election challenger who has been “allowed to meaningfully observe the process and the handling and counting of the ballot.”

The complaint includes “more than one hundred credentialed election challengers” who have provided “sworn affidavits” that they were prevented from reviewing the ballot count, or validate the legitimacy of absentee ballots. Michigan Secretary of State Jocelyn Benson is accused in the suit of failing to follow state election code, which allowed “fraud and incompetence to corrupt the conduct of the 2020 general election.”

For reference, here’s a video of people cheering as GOP poll watchers were thrown out of the TCF Center in Detroit as absentee ballots were counted.

Videos are leaking from inside TCF Center in Detroit showing them cheer as GOP poll watchers are being thrown out as absentee ballot counting is happening, the person filming this was made to delete it, democrat watcher outnumber republican by 3/1, corruption at the highest level pic.twitter.com/WqRPsAG6BS

Multiple GOP challengers attested that “batches of ballots were repeatedly run through the vote tabulation machines,” with one challenger saying she observed “a stack of about fifty ballots being fed multiple times into a ballot scanner counting machine.” Another challenger claims they “observed a station where election workers were working on scanned ballots that had issues that needed to be manually corrected,” adding “I believe some of these workers were changing votes that had been cast for Donald Trump and other Republican candidates.”

When challengers did bring up issues with ballots, they were “ignored and disregarded,” according to the complaint, with one claiming that “ballots with votes for Trump were separated from other ballots,” and that when they raised challenges over ballot numbers which didn’t match their envelopes, they were “disregarded and ignored by election officials,” and the “ballots were processed and counted.”

The filing also claims that ballots which could not be read by a machine were unlawfully duplicated out of the view of challengers, and weren’t conducted by a bipartisan pair of election inspectors.

The suit notes that in Antrim County, Michigan, voting machines manufactured by Dominion Voting Systems “were at fault” when they erroneously gave over 6,000 Trump votes to former Vice President Joe Biden. The ‘error’ – potentially affecting the same machines used in Wayne County – was blamed by Secretary of State Benson on a county clerk who failed to update certain “media drives.”

Also noted were Dominion machine errors in Oakland County Michigan, which resulted in a Democrat being wrongly declared the winner of a commissioner’s race by 104 votes – only to have their seat flip back to the rightful Republican candidate after the error was caught.

“These vote tabulator failures are a mechanical malfunction that, under MCL 168.831-168.839, requires a “special election” in the precincts affected,” reads the filing.

The filing also alleges backdating of ballots, after attorney and GOP challenger Jessica Connarn says she was told by a poll worker told her they were “being told to change the date on ballots to reflect that the ballots were received on an earlier date.”

Connarn has provided a photograph of a note handed to her by the poll worker as evidence they were instructed to change the date so that absentee ballots received after 8:00 p.m. on Election Day would be counted.

The Trump campaign also says that ballots were deposited in remote, unattended drop boxes which are “essentially equivalent to a polling place where a person can deposit a ballot,” but “there is no validation that the individual deposing a ballot in the box is an individual who is qualified to cast a vote or to lawfully deliver a ballot cast by a lawful voter.” The filing says that according to Michigan law, a remote ballot drop box “must use video monitoring of that drop box to ensure effective monitoring…“

Now we wait to see if over 100 affidavits and Trump Campaign attorney Thor Hearne are able to persuade a Michigan judge to halt certifying Joe Biden winner the state.