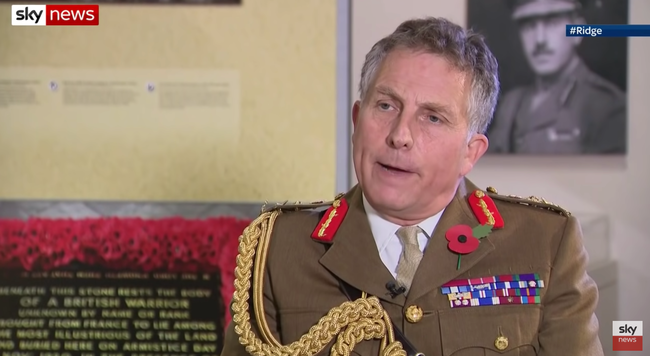 Carter told Sky’s Sophy Ridge that the virus pandemic crashed the global economy has already sparked regional conflicts that appear similar to those leading up to the previous two world wars. He warned that today’s conflicts could escalate as sides miscalculate the significance of their actions.

Case in point, on Monday, Azerbaijan “accidentally” downed a Russian military helicopter. Russia, which has a military installation in Armenia, protects the country from foreign aggressors, is involved in a delicate balancing act of also trying to maintain good relations with Azerbaijan. Moscow has said they will stay out of the conflict – Retired Lt. Gen. Yevgeny Buzhisnky, the former chief of the Russian Defense Ministry’s international cooperation department, recently said Azerbaijan is “far too important for Russia to wage war against it and Turkey.”

With the risk of the Armenia-Azerbaijan conflict escalating further, Carter told Sky’s Ridge:

“We’re living through a time when the world is a very uncertain and anxious place.

“And of course the dynamic of global competition is a feature of our lives as well.

“The real risk that we have with quite a lot of regional conflicts that we have at the moment is you could see escalation lead to miscalculation.”

He added: “An escalation means more people get involved, more weapons get involved and before you can contain it, it leads to the sides blowing in up in a full-blown war.

“If that happens, as we saw in the last century…

“We need to remember that history may not repeat itself but it has a rhythm.

“And if you look back at the last century before both world wars, I think it was unarguable that there was an escalation that led to the miscalculation which ultimately let to war at a scale we hopefully never see again.”

Asked whether he believed there is a “real threat” of a major world war, he answered: “It’s a risk, I think we need to be conscious of those risks.”

“And that’s why Remembrance matters. Because if you look back at history, hopefully, you learn from their experience and you make sure that you’re very cautious about how you manage the sorts of regional conflicts that we see playing out in the world today.”

Without specifying the regional conflicts he was most worried about, Carter told Ridge if left festering, they could easily “lead to an escalation.”

Carter also prophesied that within a decade, the modern battlefield could be littered with robot soldiers.

While the Armenia-Azerbaijan conflict is certainly a geopolitical hotspot at the moment, other potential flare-ups could include Iran-Israel, China-Taiwan, India-China, US-China, and India-Pakistan.