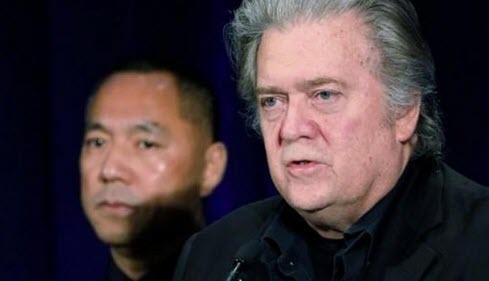 
A wealthy Chinese businessman who has “close ties” to Steve Bannon is suing UBS for $500 million after he claims to have lost the money as a result of a margin call in a deal that a Chinese-state backed investment firm was involved in.

Guo Wengui is claiming that UBS “pressured him” to borrow money to purchase Chinese brokerage Haitong Securities. When the company’s stock plunged 45% in 2015, UBS forced the sale of Guo’s shares, according to Bloomberg.

Guo has brought the case in London after failing to have it heard in New York. Guo, who lives in exile in New York, claims he “wasn’t initially aware” that there were margin call agreements in his contracts with UBS.

His suit claims that UBS helped him structure the ownership of shares through an intermediary to avoid having to disclose his stake. The shares were first bought by a Chinese state-backed investment fund and then, after they were dumped, the loss was passed on to Guo.

Guo, alongside of Bannon, has alleged that China “seeks to create turmoil in the U.S.”. Recall, Bannon was on Guo’s yacht off the coast of Connecticut when he was arrested back in August. Bannon was charged with conspiring to siphon money from a campaign to build a wall on the U.S. southern border.

Guo claims that UBS had internal policies to not make margin calls to “highly valued” customers if the underlying instrument price moved in the short term. He points to another UBS transaction, with Ping An Insurance Group Co., where UBS allegedly agreed to forego making margin calls.

UBS has said it “strongly disagrees with [Guo’s] claim and will vigorously defend itself.”