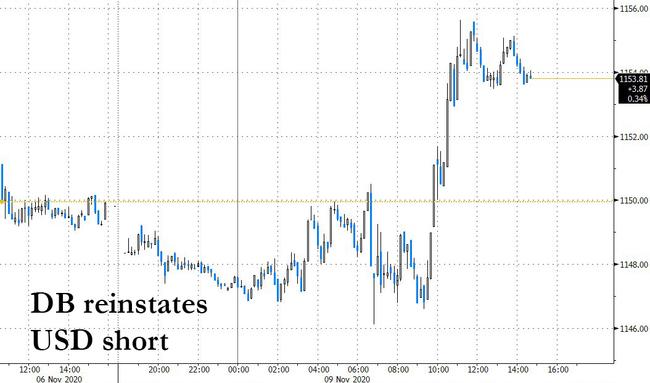 
Last Wednesday, as the market gyrated in response to what appeared to be the collapse of “Blue Wave” expectations, Deutsche Bank jumped the gun when its chief FX strategist George Saravelos rushed to close out his dollar short position, saying that “with the US election outcome extremely uncertain” he changed his USD view and turning neutral as he “no longer sees a compelling narrative of dollar weakness into year-end for three reasons.”

Ironically, and as we pointed out last week, shortly after DB reversed its position, the dollar reversed its brief jump and collapsed, suffering its biggest decline since August.

One day after Deutsche Bank closes its USD short, dollar has worst day since August

… bringing us to today, when in yet another delightful moment of Wall Street revisionism on par with that from JPMorgan, the Deutsche strategist flip-flopped on his last week all, writing “we were wrong to close our dollar short. We reinstate it.“

Here is why according to George, everything he said less than a week ago is dead wrong and in fact the opposite case is now in play:

For the last three months we have been arguing that a Biden election victory would be the single most important negative event for the dollar this year. We closed our bearish dollar view on Wednesday as it looked like the US election was going to be contested. We were wrong: Biden has emerged as the clear President-elect this weekend and the market is sending a strong message of looking through any remaining uncertainty. We were therefore wrong to close out our dollar short and we reinstate it. We believe the broad trade-weighted dollar has the potential to drop by another 3-5% into the end of the year with EUR/USD convincingly breaking 1.20, USD/JPY reaching 100 and USD/CNH 6.40, as highlighted by our Asia colleagues on Friday. It all boils down to three drivers:

Summing up DB’s latest position: “the removal of global uncertainty, a shift to dollar funding, and virus divergence against the US all favor a weaker dollar into the end of the year. China is emerging as the clear antipole of global growth and yield outperformance with CNH serving as an important anchor for broader dollar weakness. Our official forecasts already incorporate expectations of a weaker dollar into year-end so remain intact in line with the targets above.”

There was just one problem: having published this note overnight, it failed to account the latest market-moving Pfizer news which have sent Treasury yields surging, and bringing rate hike odds much closer to the present, as we noted earlier.

As a result, the market is starting to look through the entire deflationary phase of the next 2-3 years which had been fully priced in by now, and is instead starting to price in what may be Fed rate hikes as soon as 2023, or even 2022 (if note sooner) which – drumroll – has sent the dollar sharply higher!

One truly really couldn’t make this up, and for the sake of DB’s Saravelos, we can only hope that the spike in the dollar fades, or else the FX strategist will have no choice but to tell his whiplashed clients that he was wrong about being wrong about closing his dollar short.