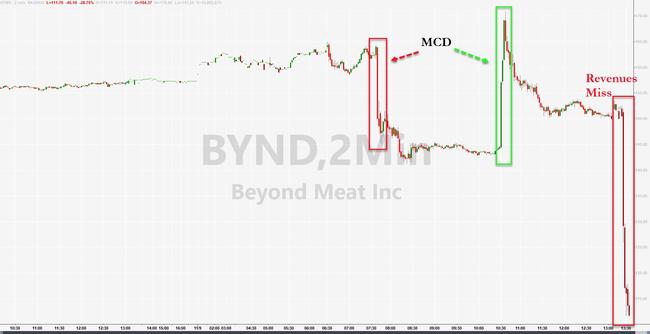 
Update 1630ET: After a tempestuous day, Beyond Meat shares are collapsing after hours following a miss on top-line sales.

Global sales rose 2.7% in the third quarter to $94.4 million, the company said Monday in a statement, well below the $132.1 million average of analyst estimates compiled by Bloomberg. The company said a decline in restaurant demand impacted sales.

“For the first time since the pandemic began, we experienced the full brunt and unpredictability of Covid-19 on our net revenues,” Chief Executive Officer Ethan Brown said.

That is the lowest since May…

As we detailed earlier, Beyond Meat shares reversed course violently after being pummeled early in the session, touching as low as $141 per share, despite the Dow being up well over 1,000 points for the entire session.

The plunge in shares was a breakneck-speed response to a headline that McDonald’s was developing its own “McPlant” in-house meat-free burger for trials next year. Competitor Burger King is already offering a similar product, its “Impossible” Whopper, in partnership with Impossible Foods.

But BYND shares swung higher in early afternoon trading after Reuters clarified that Beyond Meat helped co-create the McPlant with McDonald’s.

The market at first believed the original incomplete headline to mean that McDonald’s was foregoing a partnership and was doing their meat-free R&D in-house. For instance, outlets like CNBC reported this morning that the McPlant was “created by McDonald’s and for McDonald’s”. At the same time, no supplier had been named:

The company has not yet disclosed the supplier for the line. A company spokesperson declined to identify their supplier but said that McDonald’s will not be manufacturing the products.

But a few hours later, around 1345 EST, headlines crossed the wire to the contrary:

Beyond Meat shares are roughly unchanged on the day now.

We will update this story as more details become available.