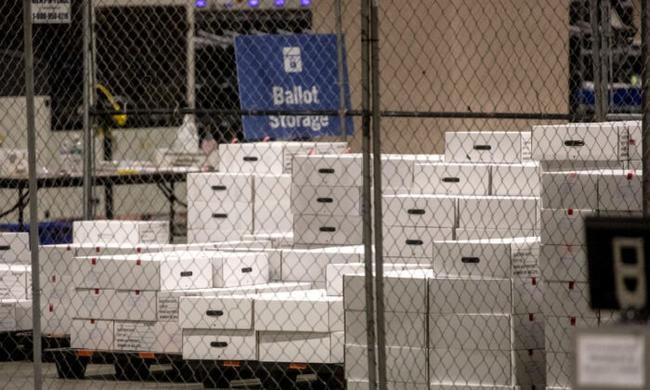 
Authored by Allen Zhong via The Epoch Times,

President Donald Trump’s reelection campaign will launch a lawsuit in Pennsylvania to challenge the mail-in ballots that have been counted without Republican poll watchers onsite.

Rudy Giuliani, Trump’s attorney announced Saturday the lawsuit during a press conference in Philadelphia, Pennsylvania, with several Republican poll watchers who were prevented from entering the poll sites or the rights of poll-watching were blocked.

A federal lawsuit will be filed on Monday in Pennsylvania and more expected in other states.

“We’re going to file a federal lawsuit that will cover here [Philadelphia] and Pittsburgh, and we will have as many witnesses as the court needs. Right now, it could be as many as 90 witnesses,” Giuliani said.

Several witnesses joined Giuliani during the press conference, all are local Philadelphia residents.

Lisette Tarragano, one of the witnesses, said she was never allowed to enter the polling site along with other five to six Republican poll watchers.

“I was never brought in. Actually, I never got past the first identification stage, they kept saying that mine as well as five or six other Republicans, their names hadn’t been entered into the system,” she said.

Two other poll watchers, Darrell Brooks and Matt Silver said they were kept 15 to 20 feet away from the ballots.

Silver also alleged that some unusual ballot boxes were witnessed inside the polling site.

The Biden campaign, the Office of Philadelphia City Commissioners, the election division of Allegheny county government, and the Pennsylvania Department of State didn’t immediately respond to requests for comment from The Epoch Times.

It was reported that a Republican poll watcher was temporarily blocked on Election Day in Philadelphia.

Kevin Feeley, a spokesman for the Philadelphia City Commissioners, admitted that the one poll watcher was prevented from entering the polling site on Nov. 3.

“The mistake was corrected, and the guy was admitted,” he said, claiming it was an isolated incident.

A poll watcher in Philly was just wrongfully prevented from entering the polling place#StopTheSteal pic.twitter.com/iJTFtRk0Id

During the election night, Trump led when the ballot canvassing started in several swing states including Pennsylvania. But the lead was diluted by the lately-counted mail-in ballots. In Pennsylvania, Democratic party presidential candidate Joe Biden took a slight lead after the mail-in ballots were counted.

Because the results are very close and several lawsuits are ongoing over the election outcome in several battlefield states, it’s more and more clear that this election will be settled through the judicial system.

The expected lawsuit by the Trump campaign will start another battle line over the outcome of the election in some swing states: mail-in ballots counted without Republican observers.

Over the past few days, Trump has been vocal over the need to protect the sanctity of the ballot box while claiming that Democrats are trying to “steal” the election from him due to efforts to count late-arriving ballots, which he alleges are “illegal.” He and his legal teams have been arguing that mail-in ballots postmarked by Nov. 3 but received after election day should not be counted and that votes that were counted without Republican observers present in the ballot-counting centers should also be considered “illegal votes.”