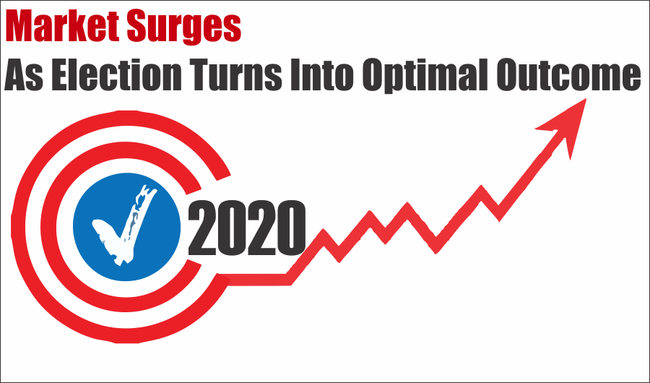 After reducing equity risk in portfolios over the last few weeks, we suggested last week the “selling” was likely overdone.

“All of our “sell signals” have been intact for the last few weeks suggesting more downside risk near term. Those signals have now reversed to the point where we are likely to see a decent reflex rally starting as early as Monday. As noted in the year-to-date performance chart below, the market is 2-standard deviations below its 50-dma and is close to the September low support.”

Just for comparison purposes, here is the chart from last week.

And it is updated through Friday’s close.

It was quite the reversal. The rally pushed the market back above the 50-dma and lower highs’ previous downtrend. Such sets the market up for a retest of all-time highs next week.

Not Out Of The Woods

However, before you get all excited and go throwing your money into the market, you may want to step back and re-evaluate your risk. If you haven’t liked the ups and downs in the market over the last couple of months, you have too much “risk” in your portfolio.

The volatility isn’t over. Particularly as we head into 2021.

Furthermore, while we did expect this rally and added exposure in our portfolios, the previous “oversold” condition has now been largely reversed. As shown below, the market is now back to more “overbought” conditions, which suggests limited upside from current levels. Also, the deviation from the 200-dma is now back to levels that have previously led to mild, short-term corrections.

“Such a rally will provide an opportunity to rebalance portfolio risks accordingly. As we will discuss momentarily, the markets will begin to process the election’s impact on various sectors and the market itself.

However, the economy’s disconnect remains longer-term, which can not last as earnings come from economic activity. While the very short-term trading environment is conducive for a rally, the longer-term ‘investing’ environment is still problematic with weakening relative strength, participation, and fundamental issues.

Keep a watch on the Advance-Decline line. Over the last few trading days, the rapid surge in prices pushed that indicator back to more extreme overbought conditions, typically denote short- to intermediate-term tops.

For all of these reasons, aggressively positioned investors can use any rally to adjust portfolio volatility and risk.

Remember, investing isn’t a competition for who can say they “beat the market.” There are no “trophies.” However, there is a heavy penalty to your retirement goals if you are wrong.

Gridlock Is Best For Markets

On Thursday, in our daily “3-Minutes” video, I discussed why the markets were rallying despite a hotly contested election.

As noted, it doesn’t matter who the President is. With the GOP potentially maintaining control of the Senate and narrowing the majority in the House, such vastly reduces significant policy changes such as:

Such bodes well for the markets as noted by MarketWatch:

“The likely reason that Wall Street likes gridlock is that it reduces the possibility that any major policy changes will take effect. Sam Stovall, chief investment strategist at CFRA, noted in an email to clients that the increasingly likely gridlock ‘lessens the prospects for an increase in regulations and taxes.’ In addition, he added, the gridlock reduces the likelihood of ‘additional fiscal stimulus’ — and that reduced likelihood in turn eases potential inflationary pressures down the road.”

As noted last week, such also aligns with historical Presidential election years. The weakness in September and October turns to strength in November and December.

A Continuation Of The Rally Into Year-End

My colleague Doug Kass confirms our view of a rally into year-end.

“With the perception, in part, of election uncertainty and the quicker spread of Covid-19, market participants have been positioned defensively and cautiously. We have exited the weakest period of the calendar (August to October) and are entering a two-month period where stocks are seasonally strong.

The evolving market structure change, in which the market is dominated by products and strategies chasing price and momentum, could catapult the markets higher rather swiftly. In ‘risk parity’ and other quant strategies, ‘buyers live higher and sellers live lower.’ They are and might continue to buy high.”

Combine his thesis with a lack of significant policy changes from Washington, and it is likely money will continue to chase “risk assets” given no other alternative currently.  With yield spreads compressed, interest rates at zero, the “T.I.N.A” (There Is No Alternative) narrative continues to reign.

The Focus Turns Back To The Fed

Once we start to analyze what “Gridlock” will mean for policy, it should become apparent what the “risks” are.

As we have noted previously, earnings growth rates continue to drop as we head into next year. With stock prices back near all-time highs, this continues to be a market that is driven solely by valuation expansion.

The majority of that “price chase” has been based solely on the premise of more liquidity coming from the Federal Reserve. The hope, of course, is that eventually, earnings will play “catchup” with valuations. Historically, such has never been the case.

As we head into 2021, a “gridlocked” Congress potentially means less stimulus, less infrastructure spending, and more battles over the debt and deficit. The regular “debt ceiling” fights will return, and smaller stimulus packages will compound time delays.

Such translates into three critical factors for the financial markets:

In 2021, the odds of another recessionary bought will increase, putting downward pressure on stocks. The only question will be if the Federal Reserve can bail it out again as the “effective benefit” continues to decline.

The Fed Remains Stuck At Zero

This past week, the Federal Open Market Committee (FOMC) concluded their meeting. Not surprisingly, given the embattled election and lack of stimulus, they provided “happy talk” to the markets.

In other words, they said “nothing.”  As Mish Shedlock noted in his post:

“The Fed is stuck in glue. It did not change interest rates. Nor did it change much of its announcement.”

However, it is more important to understand their dilemma.

“The Fed is stuck and will not lower rates below zero nor can it raise them without killing housing. Meanwhile, the bubbles keep getting bigger increasing the odds of a deflationary collapse.”

Such is indeed the most significant risk to both the economy and the markets. As we noted in yesterday’s “Rescues Are Ruining Capitalism.”

“The rest of the world followed the Fed. As interest rates fell toward zero, the world’s debts—including households, governments and nonfinancial companies—more than tripled between 1980 and 2007 to more than three times the size of the global economy.

It was taking more debt to fuel the same amount of growth, because more debt was going to unproductive borrowers. Capitalism was bogging down.” – Sharma

Each successive round of stimulus pulls forward future consumption, which leaves a void. That void then has to be filled with more stimulus, which leaves a larger void in the future.

Eventually, the void will become too large to fill.

“The continuous bailouts continue to distort the market’s price signals, which makes the markets less efficient in allocating capital. Such has led to the rising number of “zombies” and monopolies, the widening of wealth inequality, and lower productivity and growth.

The deformation of capitalism will be an economic plague that continues to lead to further dysfunction alienating younger generations. Social unrest and revolt will be the eventual result.”

Over the last few weeks, we discussed that we had gradually raised cash and rebalanced portfolio risks ahead of the Presidential election. After the election passed, and we could see where the markets were positioning themselves, we reallocated that cash and took our equity exposure back to target weightings.

There were two primary reasons for the reversal. The first was that the sell-off had removed short-term risk over the last few weeks. The second was the outcome of the election perceived as favorable to the markets, as discussed above. There are still risks to that view until the election is officially over. Therefore, we will keep a close watch on holdings and tighten up our stops.

As we discussed recently in “Policies Over Politics,” what matters most long-term are taxes, debt, and deficits. Unfortunately, we will probably head the wrong way on all three.

Last week, I stated that we would “not buy the market’s low.” We did wait for the market to “tell us,” what it was going to do, and then we acted quickly to put capital to work. We are currently near full exposure to equities, are slightly underweight in bonds with a shortened-duration, and have tightened current stop-losses.

While the next two months tend to be positively biased, there is still a considerable risk to the markets. Markets remain deviated from long-term means, economic growth remains weak, and further stimulus will remain elusive.

As such, it is worth remaining vigilant over portfolios and using rallies to rebalance portfolio risks as needed.

To win the “investing war,” it is essential to pick and choose our “battles” wisely. If you aren’t sure about the battleground, it is always better to retreat and “live to fight another day.”