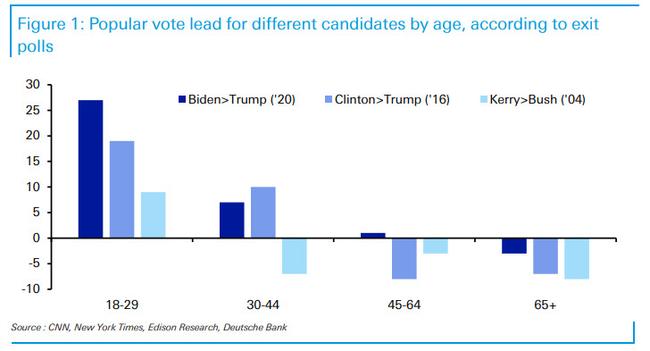 
Whoever wins the presidential race, one thing is certain: voter turnout is set to be the highest since 1900.

“Did mail-ins or passion increase this”, asks Jim Reid in his daily noting that if it was the former, Covid may have shown how we can enfranchise more voters around the world by offering an alternative to the traditional ballot box.

Reid then makes another observation, pointing out that according to an exit poll by Edison Research, 76% of Trump voters felt  rebuilding the economy now, even if it hurts efforts to contain the coronavirus” was more important than “containing the coronavirus now, even if it hurts the economy”, while 80% of Biden voters felt the opposite showing how polarized views on lockdowns etc. possibly are.

So will the young voters win it for Biden?

Answering this question, and assuming Biden does creep over the Electoral college line, today’s chart from Reid shows estimates of the Dems advantage over the GOP in 2020, 2016 and 2004 by age. 2004 was chosen as that seems to be the last election before there was a big intergenerational age split in voter’s party preferences.

This means that if only those 29-and-over voted, based on Reid’s back of the envelope calculations, Trump would have been ‘only’ 2% behind in the popular vote and would possibly have had enough to have won the electoral college. In other words, if the soon to be 78 year old Joe Biden does win, he have the Gen Zers to thank.

And speaking of young vs oldwe remind readers that according to Reid, the “intergenerational divide” will be a great source of disorder in the decade ahead and potentially turn politics sharply leftwards if policies continue as they have (see “The Millennials Are Coming For The Boomers’ Money: One Bank Sees Generational Conflict Breaking Out This Decade“).

As Reid concludes, “the right have generally outperformed in elections over the last decade across the world. To see this continue they may need to address their falling support among the young.”