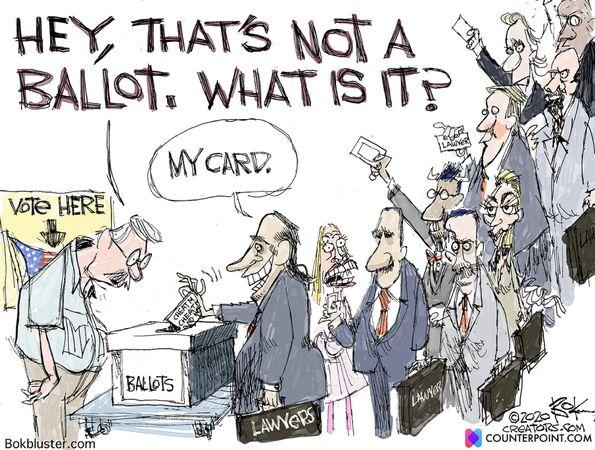 If polls are correct that a majority of Democrats intend to vote by mail, the in-person vote of Democrats will be too small to declare a Biden victory. The strategy here will be to keep the outcome open for days while mail-in votes are counted. Some states require the votes to be in by election day (Nov. 3), but others only require a postmark by Nov. 3. In other words, many votes could be mailed today and not arrive for some days.

By keeping the outcome open, voting-by-mail gives the Democrats time to scheme how to produce the necessary votes, and the presstitutes have time to make propaganda against Trump.

There are also the legal teams organized by Democrats to bring challenges, if Trump wins, to vote-counting in states that Trump wins. These challenges are likely to be heard by Democrat judges and until the cases work their way up to the Supreme Court, the issue of who is the president remains open.

And then there is violence. What is called the left – Antifa and Black Lives Matter – have organized to shut down Washington D.C., blockade the White House, and to unleash riots in a number of cities. The presstitutes will blame the burning and looting on Trump’s refusal to step down. The weak-of-heart among Trump supporters, if any such exist, will respond to the fear that violence generates by abandoning Trump.

The left, or so-called left, labels Trump a fascist and calls his supporters “fascist white supremacists.” But it is the so-called left—a fake left—that is fascist. Antifa and Black Lives Matter (BLM) are the Nazi Brownshirts of our time. They are conducting their Kristallnachts breaking the windows of white businesses and looting and burning the buildings. It is the Antifa and BLM fascist thugs who are threatening white neighborhoods, and it is these Brownshirted Thugs who are beating Trump supporters just as their fellow Brownshirts beat Jews in 1930s Germany.

There are no “Trump white supremacists” rioting in the streets, looting and burning businesses, and conducting a Kristallnacht against Democrats.

As disillusioned and as skeptical of insouciant Americans as I am, I see no indication of a Democrat win. The feminists, the university professors, whore media, and indoctrinated young will vote for Biden and for a “female of color” who hates white people. In general, Americans with university degrees are unreliable. But the working class knows better, and these “Trump Deplorables,” as designated by Hillary Clinton, will vote for Trump. They know who is on their side.

Trump’s campaign events were overwhelmingly attended. Hardly anyone turned out for Biden’s and not even effete liberals wanted to hear Kamala. Judging by the attendance at campaign rallies, there is no possible way that Biden is ahead by 10 points as the polls say. Either the pollsters are setting up to steal the election from Trump by reporting that he could not have won as he was 10 points behind or Trump supporters withheld from pollsters their support for Trump.

But after Trump what?

America has lost its educated youth. They have been indoctrinated in their education that America is racist, sexist, imperialist, oppressive, and evil. The anti-American, anti-white New York Times teaches our youth that America was evil in 1619, 157 years prior to the creation of the US with the Declaration of Independence. In a few years when my and Trump’s generation passes, who remains to stand for America? The numbers are diminished and the country with them. How many years before the anti-American, anti-white Kamalas prevail?

If Trump wins, can he secure America’s future from the anti-Americans amongs us?